Support from the International Monetary Fund (IMF) to Sri Lanka has crossed the $ 1 billion mark under its ongoing program based on the success of key reforms, a course which it wants the Government to continue.

The passing of the $ 1 billion funding mark by the IMF followed the release of a fresh $ 252 million under its Extended Fund Facility (EFF) arrangement. 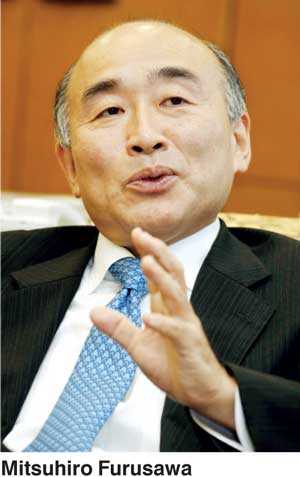 The approval and disbursement follows the IMF Executive Board on Friday completing the fourth review of Sri Lanka’s economic performance under the three-year EFF program. To date $ 1.014 billion has been released by the IMF under the $ 1.5 billion EFF approved two years ago.

The IMF also concluded the Article IV Consultation with the Government.

Following the Executive Board’s discussion of the fourth review of EFF, IMF’s Acting Chair and Deputy Managing Director Mitsuhiro Furusawa said: “Sri Lanka has made important progress under its Fund-supported program.” He said the authorities’ efforts to improve the policy mix through fiscal consolidation, prudent monetary policy and landmark structural reforms were supporting economic recovery, despite recent shocks. “Sustaining the reform momentum is critical to strengthen the country’s resilience to shocks, given the still sizable public debt and low external buffers, and to set the foundation for strong and inclusive growth,” Furusawa emphasised. The IMF also said further progress with revenue-based fiscal consolidation, supported by the new Inland Revenue Act, was needed to help safeguard important social and infrastructure spending, including in response to natural disasters.

IMF said the recent approval of an automatic fuel pricing formula was a major achievement towards reducing fiscal risks from state-owned enterprises (SOEs).

In this regard, the IMF said it was essential for the authorities to implement an automatic pricing formula for electricity and a restructuring plan for SriLankan Airlines, as well as further strengthening SOE governance and transparency. The impact of the reforms on the vulnerable can be mitigated by ongoing efforts to strengthen social safety nets. 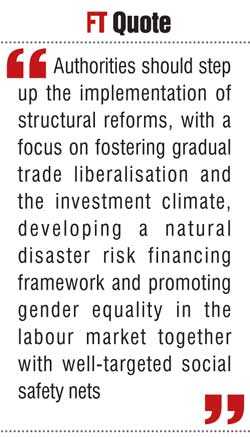 “The Central Bank of Sri Lanka should continue to manage monetary policy prudently, in the face of price shocks and market volatility,” the IMF said.

Efforts to build up international reserves should be sustained, with exchange rate flexibility as the first line of defense in response to volatile global capital flows. Upgrading the Central Bank law will be instrumental for the new inflation targeting framework. While financial soundness indicators remain stable, continued credit growth in the real estate sector warrants close monitoring.

“The authorities should step up implementation of structural reforms, with a focus on fostering gradual trade liberalisation and the investment climate, developing a natural disaster risk financing framework and promoting gender equality in the labor market together with well-targeted social safety nets,” the IMF emphasised.

The IMF said it would shortly issue a separate statement on the conclusion of the 2018 Article IV Consultation with the Government.

The IMF’s EFF was established to provide support of comprehensive programs that include policies of the scope and character required to correct structural imbalances over an extended period.