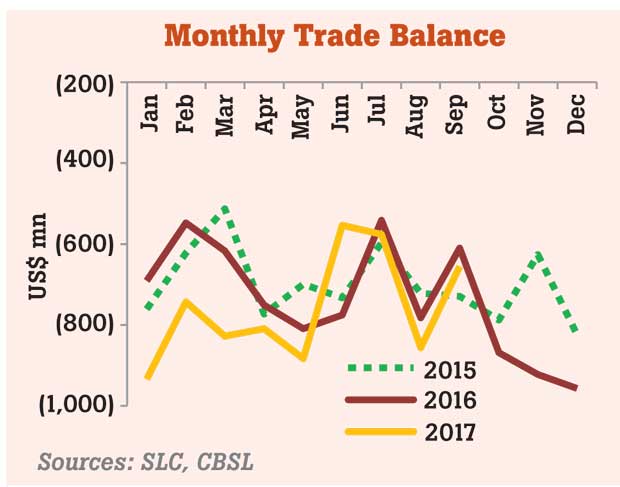 Despite a double-digit growth in exports revenue, surpassing the US $ 1 billion mark, Sri Lanka’s trade deficit in September widened due to higher fuel and rice imports, the data released by the Central Bank showed.

Accordingly, the September trade deficit widened to US $ 656 million from US $ 610 million last year and the deficit in the first nine months expanded to US $ 6.84 billion from US $ 6.13 billion recorded for the same period, last year.   Earnings from exports, which grew since March 2017, continued its increasing trend in September 2017 as well. For September, export earnings registered a growth of 12.6 percent year-on-year (YoY) to US $ 1.01 billion.

This growth was mainly led by higher earnings from industrial exports owing to the increase in exports of textiles and garments as a result of improved garment exports to the USA and European Union market due to the restoration of the GSP Plus facility.

For the first nine months of the year, the cumulative earnings from exports grew 8.2 percent YoY to US $ 8.42 billion.

The USA, UK, India, Italy and Germany were the leading markets for merchandise exports of Sri Lanka in September 2017, accounting for about 51 percent of total exports.

“Expenditure on fuel imports increased significantly due to the combined effect of high prices in the international market and higher volumes of fuel imported for thermal-based power generation,” the Central Bank said.

However, following the measures taken to fulfil the shortage of rice in the domestic market, expenditure on rice imports continued to increase in September 2017, adding around 497,889 metric tonnes so far during 2017 from 21,457 metric tonnes imported during the corresponding period of 2016.

As a result, expenditure on rice imports rose to US $ 22 million from US $ 1.4 million YoY.

Meanwhile, vehicle imports fell 8.9 percent YoY to US $ 55.4 million as people were expecting duty reductions from the November budget.

With regard to the origin of imports, India, China, Singapore, the UAE and Japan were the main import origins during September 2017, accounting for about 58 percent of total imports.

Continuing with its disturbing trend, workers’ remittances during the month of September fell almost 17 percent YoY or by US $ 97 million to US $ 481 million, recording the sharpest monthly decline for this year.

For the first nine months of the year, earnings from workers’ remittances fell 7 percent YoY or by US $ 397 million to US $ 4.98 billion.

“Slower growth in economic activities and adverse geopolitical conditions prevailing in the Middle Eastern region continued to have a negative impact on workers’ remittances,” the Central Bank said. The diplomatic row between oil-rich Qatar and its Arab neighbours appears to be the key reason for the decline in remittances.
About two million Sri Lankans work overseas, mostly in the Middle East and in construction and hospitality sectors or as housemaids.  Money they send back is Sri Lanka’s biggest source of foreign exchange and helps to cover up 80 percent of the trade deficit. Central Bank Governor Dr. Indrajit Coomaraswamy told reporters in Colombo recently that the declining remittance income could be a blessing in disguise because the country’s small businesses, which are expanding, are now looking for workers. 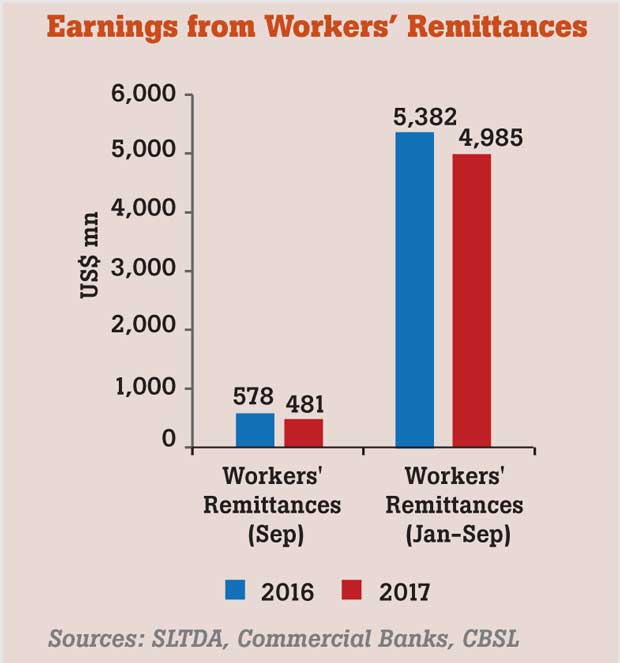