By Chandeepa Wettasinghe
The top management of the Ceylon Electricity Board (CEB) will be dealt with appropriately for not facing the public and explaining why it is not responsibly discharging its duties to ensure energy security in Sri Lanka in an efficient manner, a visibly-irate National Policies and Economic Affairs Minister Dr. Harsha de Silva told a forum in Colombo, yesterday.

He expressed his outrage at the behaviour of the state-owned electricity supply monopoly during the Sri Lanka Energy Forum organized by the utility’s regulator, the Public Utilities Commission of Sri Lanka (PUCSL). 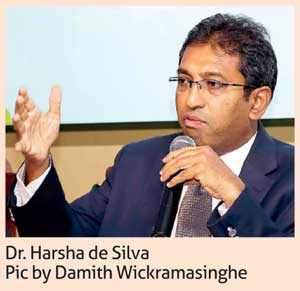 “Let me on behalf of my minister, the Prime Minister, express our deep disappointment that the Ceylon Electricity Board (CEB) has been very unprofessional by not participating in this important forum, and we will deal with this appropriately in time to come,” he said.

Dr. de Silva noted that the CEB General Manager A.K. Samarasinghe was “running away in fear” by not being present at the forum to answer questions on CEB’s inefficiencies and its refusal to sit on tender boards and technical committees to show opposition against PUCSL for implementing an environmentally-friend least-cost power generation plan.

Dr. de Silva said that CEB was generating power inefficiently despite the staff drawing high salaries, and that although CEB had provided universal access to electricity, there was no reliability in electricity supply.

Energy Consultant Dr. Tilak Siyambalapitiya said that CEB inefficiencies are due to over staffing.
Meanwhile, Dr. de Silva confirmed that CEB officials had attempted to disqualify five bids received for the 300MW LNG power plant in Kerawalapitiya and provide the tender to one bidder who did not have a proper bid and who was the most expensive.

Power and Energy Ministry Secretary Dr. Suren Batagoda, a few weeks ago, had attempted to cover up the tender situation described by Dr. de Silva when questioned by Mirror Business.

While CEB officials were not present to defend the attempt to award the contract to the most expensive bidder, PUCSL a few months ago reprimanded CEB for attempting to mislead the public and the government by using incorrect statistics to show that LNG was more expensive than it was in the 2017 least-cost generation plan.

During the public consultation process, experts had picked apart the CEB’s attempts to promote a coal-heavy generation plan at the cost of environmental and health impacts and CEB’s duplicity in making LNG look too expensive.

The PUCSL had then tasked the CEB to submit several more generation scenarios, and chosen the no-coal option, which had also turned out to be the least-cost, which PUCSL Director General stressed on yesterday.

Dr. de Silva said that if CEB was against a no-coal option, it should discuss with all stakeholders instead of protesting and shirking away from duties when their salaries are paid by  the public,  who incidentally rejected further coal power plants, which even led to the halting of the India-backed Sampur coal power plant.

With the delaying and eventual cancellation of Sampur, Sri Lanka started to face the possibility of a power crisis, and the PUCSL had directed the CEB to start immediately tendering power plants which were approved in past generation plans—the first being the Kerawalapitiya  plant—due to the challenge faced by the country.

Dr. de Silva said that if the CEB keeps holding the country to ransom and doesn’t return to the proper tender process soon, further consequences will follow.

“A warning was given. By Wednesday of next week, it has to be done. If it’s not done, then we will see what happens by next week Wednesday, because this kind of activity cannot go on.  The persons who pay the price are the poor citizens of this country,” he said.

He also added that CEB has for several years delayed the tendering of 385MW of solar power, 245MW and 425MW of oil and 450MW of LNG.