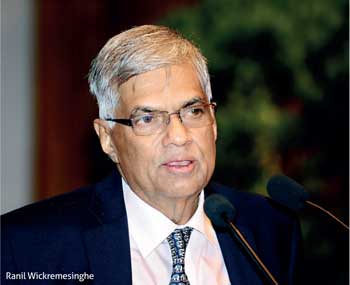 Prime Minister Ranil Wickremesinghe yesterday told Parliament that the government will launch a fresh investigation into the Treasury bond issues between 2008-2014 period, once all the activities of the Presidential Committee of Inquiry, which was appointed to investigate into the alleged bond market malpractices post-2015, is concluded.

According to Wickremesinghe, over 90 percent of the Treasury bonds during the 2008-2014 period were issued under the direct placement method without the consent of the Monetary Board.

“When we came into power in 2015, we checked on this and we found out the Monetary Board had not given any approval to issue bonds under the direct placement method.

As a short–term measure, the Monetary Board had decided to raise funds for the government through captive sources such as the Employees’ Provident Fund, Employees’ Trust Fund and National Savings Bank. The decision was to get these captive sources to issue bonds and not to raise massive amounts of money through private placements,” Wickremesinghe added.

He said during 2008-2014 period, Treasury bonds to the tune of Rs.5147 billion were issued, and out of that Rs.4702 billion was issued under the direct placement method at 84 instances. Only Rs.435.5 billion was issued through the auction method.

“So what has happened? Without any approval from the Monetary Board and without any transparency, bonds running into billions of rupees were issued to selected primary dealers at compromised interest rates. “This was the biggest pyramid scheme in this country,” Wickremesinghe charged.

Based on a Central Bank forecast, Wickremesinghe said Sri Lanka will have to pay Rs.4154 billion from 2017 to 2045 for the Treasury bonds so far offered and the interest payment would amount to another Rs.3086 billion.

He said these figures would go further up as the government will have to borrow further during this period.

“So we are trying to strengthen the economy though our ‘2025 Vision’ to settle these debts and bring development to this country,” Wickremesinghe said.