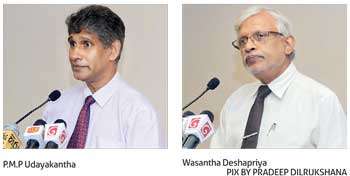 Aiming for quick wins to move up the 2019 Ease of Doing Business rankings of the World Bank, the Sri Lankan government will be introducing online property search and registration services for the city of Colombo, while other regions would be left waiting for another two years.

“The World Bank evaluation usually starts from March each year and ends in June, and whatever we do to improve the situation, we will have to do it visibly in this time to get marks. Not only to get marks I mean, but in the broader concept to improve the situation related to land,” Surveyor General P.M.P Udayakantha said.
He was speaking at a media briefing held in Colombo this week to give an update on the progress of the land registration task force, which is one of the eight task forces established by the government to move up to the top 70 ranks by the 2020 Ease of Doing Business edition compared to the 111th position held in the 2018 rankings.

He said that the task force has by now managed to cut down the time taken to browse through deeds and register a property by adhering to the existing 9 processes from 51 days to 26 days, and after the digitization comes into effect, properties could be registered within 5 days by following one or  two processes.

The ultimate objective is to set up a single online interface, which could link together all services related to registering a property, including payment options and local governments, according to Udayakantha, which would hopefully improve Sri Lanka’s last registration ranking from 157th out of 190 countries.

However, he admitted that since the World Bank evaluates each country’s largest commercial city for the rankings, the new services for searching the status of properties online and registering them will only be provided in Colombo at the start.

“Since Colombo is used for evaluation purposes we are focusing on Colombo,” he said.

Those wanting to grab the opportunities outside Colombo; near the Chinese-owned Hambantota Port, the many planned investment zones, or the numerous tourism hotspots, would have to wait until 2020 to enjoy the benefits, even if the World Bank ranks the country better over the next two evaluation cycles.

“Following Colombo, we’re hoping to digitize the services for the Western Province by 2019 and for the other provinces by 2020,” Udayakantha said.

The initial optimization to rise up the rankings is based on the World Bank’s hypothetical scenario of registering a warehouse complex situated in a 40-perch property in Colombo, according to Udayakantha.

He said that the actions of the land registration task force are being taken with World Bank support.

“The World Bank has been helping us on this activity, and always encouraging us and advising us,” Udayakantha said.

The World Bank was recently engulfed in a scandal related to how it evaluates countries for Doing Business rankings.

The then Chief Economist of the World Bank, Paul Romer, accused the organization of manipulating Doing Business rankings for political purposes, before he recanted his views and resigned.

The current Sri Lankan government has been viewed as pro-West, and even the World Bank’s sister organization, the International Monetary Fund, was overly positive during the latest evaluation of the Sri Lankan economy, choosing to ignore risks and reform action not taken by the government, after it lost the local polls to Mahinda Rajapaksa loyalists, who are anti-West.

While hailing it as a win for e-governance, he advised the stakeholders to embrace the initial system cautiously.

“Those systems will need time to mature, time to get the systems refined, and definitely there would be early hiccups,” he said.

Proving his point, our sister paper, the Sunday Times this week reported that the Finance Ministry has to spend over Rs. 4 billion to upgrade or replace its online tax system, since the current system, installed in 2015 at a cost of Rs. 6 billion, is breaking down.