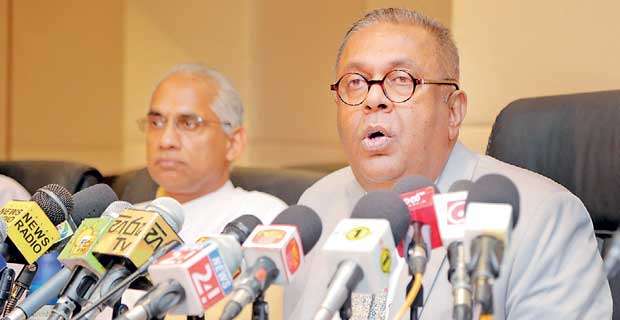 Accordingly, the government raised the price of a litre of 92-octane petrol to Rs.137 from Rs.117 and a litre of diesel to Rs.119 from Rs.109 effective from today.
This is the first time Sri Lanka raised prices of fuel since the current coalition government came into power in January 2015. “The fuel prices will be reviewed every two months and the prices will be adjusted on the 5th of the next month and will be announced according to the formula,” Finance and Mass Media Minister Mangala Samaraweera told reporters in Colombo, yesterday.

He said re-pricing of fuel prices will be based on Platts Singapore benchmark prices.

Meanwhile, the minister denied the claims that the International Monetary Fund (IMF) exerted pressure on the government to introduce the automatic pricing formula for fuel.

The IMF last month said they would consider the completion of the fourth review of the Extended Fund Facility programme with Sri Lanka subject to Cabinet approval of an automatic fuel pricing formula by June.

While referring to a recent household income and expenditure survey, Samaraweera pointed out that benefits of subsidized fuels were largely enjoyed by the the richest people in the country as the survey indicated that the top 10 percent wealthiest persons reaped 30 percent of benefits of the subsided fuels.

The minister announced that the saving of Rs.55.89 billion that will be gained form the removal of fuel subsidies, will be invested in a rapid rural development project called ‘Gamperaliya,’ which will be launched next August for a period of 18 months.

The programme will focus on developing rural infrastructure such as roads and repairing 20,000 small tanks across the island while every divisional secretariat is set to receive approximately Rs.178 million.

In addition, the government also plans to introduce a park and a recreation centre for every village while repairing religious places in rural areas.

According to Samaraweera, the government has already allocated Rs.30 billion for a rural road development programme in the 2018 budget.

The minister expects that with the current volatile global politics, particularly with U.S. President Donald Trump walking away from the Iran nuclear deal, the oil prices are set to hit US $ 80 a barrel from the current US $ 77.

Meanwhile, the government has increased the price of kerosene sharply by almost 130 percent to Rs.101 per litre from Rs 44.

Samaraweera said the kerosene price was increased sharply in order to put a stop to the abuse of the subsidy by motorists. He noted that diesel vehicle owners have been using kerosene due to lower price.

However, the minister said that fishermen, Samurdhi beneficiaries and plantation sector communities who don’t have electricity would still be able to purchase kerosene at Rs. 44.

He noted that the government has gathered data on these communities who are still very much dependent on kerosene as their major source of energy. The government expects to provide the subsidy to these communities through coupons or directly depositing necessary funds to their bank accounts from June 1.
State Finance Minister Eran Wickramaratne, who was also present at the press briefing, pointed out that during the last 30-40 year period, fuel prices were decided on by the governments according to their agendas.

Hence, he said the introduction of the fuel pricing mechanism, which is a major structural change, would provide for households and businesses to predict future fuel prices and allow them to adjust their fuel consumption based on that. Wickramaratne said that the fuel price won’t have a considerable impact on food prices and prices of other goods, as inflation remains as low as 3 percent.

Minister Samaraweera asserted that the removal of fuel subsidies alone will not bring the Ceylon Petroleum Corporation (CPC) back to profitability, suggesting the need for structural changes to the State-run utility.

Samaraweera said he is planning to discuss these structural changes with the Petroleum Resources Development Minister Arjuna Ranatunga shortly.
However, he noted that Ranatunga should take initiative to restructure the CPC as Finance and Mass Media Ministry is unable to initiate it.

“The Minister of Petroleum Resources needs to decide on CPC. However, our opinion is that CPC should be restructured,” Samaraweera said.

According to officials, CPC has incurred a loss of Rs.11.3 billion for first quarter of this year.