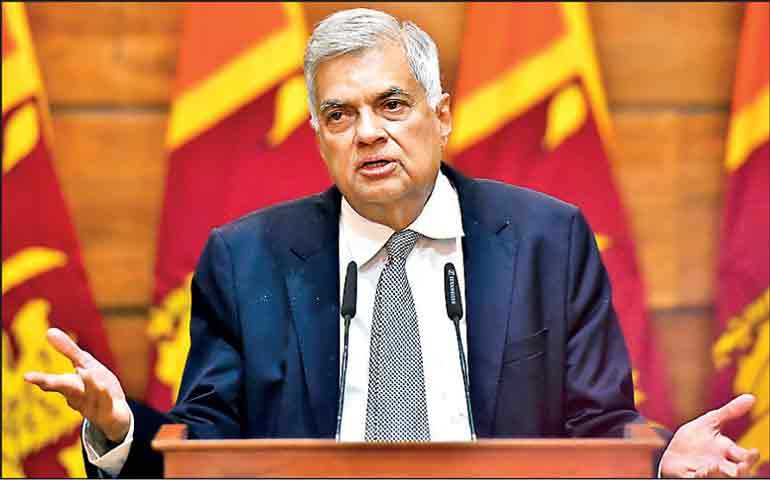 Security forces were on high alert yesterday with multiple search operations taking place countrywide as investigations continued into Sunday’s bombings, with the Government saying more attacks were possible but assuring that progress was being made in apprehending those responsible. The National Thowheed Jamath (NTJ) was mentioned as the organisation linked to the attacks that have left 321 people dead by State Minister of Defence Ruwan Wijewardene in Parliament. Wijewardene also said the attacks could have been in retaliation to the Christchurch attack in New Zealand.

During his statement he also said that an organisation with the acronym JMI had been found to have connections to NTJ but declined to elaborate. Subsequent reporting by international media named JMI as Jammiyathul Millathu Ibrahim. In addition reports also indicated that Islamic State had claimed responsibility for the attack and released a video with photos of people they claimed were responsible. “The executors of the attack that targeted citizens of coalition states and Christians in Sri Lanka two days ago were Islamic State fighters,” Islamic State said according to SITE, a security consultancy that tracks militant groups.

However, Prime Minister Ranil Wickremesinghe during a press conference on Tuesday evening was less clear about the connections.

He did not give the full name of JMI and said the Government was aware of “small breakaway groups” but could not immediately divulge details.

“It’s possible it could have been because of Christchurch,” Wickremesinghe said. “We don’t know. During the questioning Police will find out the reason for the attack.”

Wickremesinghe said there could be additional attackers at large, some armed with explosives. He declined to say how many people may be at large but insisted that investigations were progressing well.

“I would like to say that the investigators are making good progress with regard to identifying culprits. That means we have to identify all culprits and their network,” he said, declining to elaborate on NTJ or JMI.

“There is a news story coming in from Cairo that the ISIS had claimed responsibility. All that we knew was that they are foreign links, that this could not have been done just locally. There has been training given and coordination given which we have not seen earlier. A lot of countries are helping us, starting with the United States and other countries and Police will decide whom to work with.”

“There is a foreign involvement and some of them travel abroad, there might be more, that is why we want foreign assistance. Anyway they are conducting their own investigations because their nationals were killed,” he added.

Prime Minister Wickremesinghe responding to questions of a possible Syrian national being arrested in connection to the attacks denied any such detention and said all those arrested were locals.

He also expressed grief over the attacks and acknowledged there would be an economic fallout, which could include foreign exchange outflows from the country and loss of investor confidence. Wickremesinghe also emphasised that the recent attacks would not be allowed to undermine the unity between different religious and ethnic communities.

“Religious leaders and political leaders, all have been asking for the public to remain calm. There have been people helping each other out irrespective of their religions and we have had discussions with minority parties on how to move forward.”

Wickremesinghe also downplayed the impact of the rift between himself and President Maithripala Sirisena, saying access to intelligence had been restored and an inquiry launched into the intelligence sharing lapses.

The Government re-imposed curfew till 4 a.m. on Wednesday morning and continued the social media ban, which the Prime Minister said would be taken up during a meeting today. He defended the suspension of access and said it had proved to be effective in the past. Several search operations were also carried out.

Meanwhile, acting on a suspicion, the Bomb Disposal Squad carried out a search for explosives in the Colombo Harbour but later cleared the area as safe. However later all Police stations in Colombo were put on high alert about a lorry and a van suspected to be carrying explosives. The Prime Minister also confirmed that a security alert was issued.

Sources within the Criminal Investigation Division (CID) confirmed that all six suicide attackers have been identified. Further, 40 people who have been arrested with direct links to the attackers were being questioned, Police Spokesperson Ruwan Gunesekara confirmed.

The CID is now probing into the phone records of the suspects, to establish the links with those who carried out the attacks and those in custody, sources said.

Setting the stage for today’s debate in Parliament, the Prime Minister held Sri Lanka was now a victim of global terrorism, which was different from experience gained from domestic terrorism which was mainly based on political ideologies.

“In the past we had a war carried out at ground level. We won that war, which was fought in different ways, including guerrilla warfare, openly and suicide bombings. The war carried out on the ground level was supported by suicide bombings. With the war coming to an end in 2009, things changed. It was a war with a political motive. What we have now is global terrorism,” he said.

Citing the United Kingdom as an example for the lawmakers, Wickremesinghe went on to describe the different types of terrorism and warfare. “The United Kingdom had a traditional fight during the Falklands War. They had a similar fight to ours in Northern Ireland. Having ended both, the UK is now facing a new war, which is global terrorism. Now London has reached a level where people get killed using motor vehicles. According to the Global Terrorism Index, what we have now is terrorism based on religion compared to terrorism based on racism,” he said.

Wickremesinghe also recalled previous global attacks and said the Government would have to evolve to deal with a new type of national security challenges.

“We can identify it as long-term and organised terrorism. Even though a few took part, they are given good training. They have organised a series of such attacks and we were able to stop a part of it and the particular group is no longer unknown to us. There are masterminds in it as well as handlers of suicide bombers. Police and the armed forces along with the intelligence community are working to arrest them. Declaring a State of Emergency enables us to arrest them and to detain them for interrogation. As a result, some were arrested and revealed important information,” he added, assuring the country that the majority of Muslims were against this extremist movement.

“We need to keep in mind that a few Tamils supported terrorists in 1983. But eventually it took a different turn with Black July and it took a long time to eradicate it. Another aim of these extremists is to damage our economy. Starting from Luxor in Egypt, these terrorists learned the way to destroy the tourism industry. They attacked us when the economy was picking up during the Sinhala and Hindu New Year season. We are taking measures to protect tourist attractions and the economy. We will not allow another 30-year war to take place,” he asserted.

He noted that the UN Secretary-General has requested others to support Sri Lanka and the UN Office for Counter-Terrorism had given Sri Lanka all support.

“In addition, I have received telephone calls and letters from world leaders including US President Donald Trump. We have strong support from the international community. All that is required now is to face this and eradicate terrorism here. We need to work together with Parliament. I summoned the IGP and instructed him to work with Parliament.”