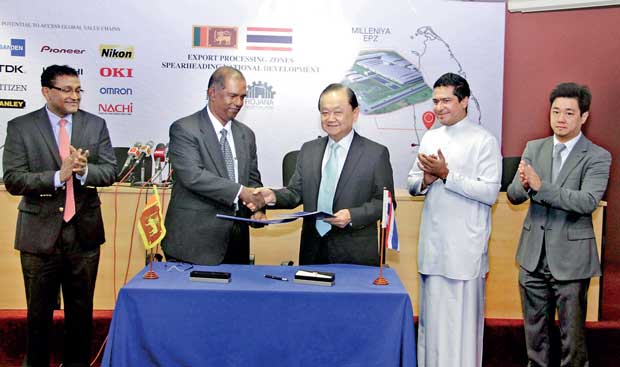 The hyped up Milleniya Export Processing Zone (EPZ) in the Kalutara District, which is to be developed as a public-private partnership with Thai industrial park development giant, Rojana Industrial Park Public Company Ltd (Rojana), will attract US $ 500 million in its initial phases, the Sri Lankan government said yesterday.

“They initially requested a 1,000 acre land from us. In the first phase we will give them 250 acres and in the second phase 150 acres. For the 400 acres in the first two phases, we are expecting approximately US $ 500 million in foreign direct investments,” Development Strategies and International Trade State Minister Sujeewa Senasinghe said.

He was speaking at a ceremony held at the Board of Investment (BOI) to sign the Joint Letter of Intent between the state and Rojana to develop the EPZ.

Senasinghe said that the government has 1,200 acres of rubber plantation in the area, from which the 400 acres would be sourced and the entire extent could be provided to the EPZ for future expansions depending on its success.

The government is expecting the project to create 10,000 new jobs through 100 manufacturing operations in the first two phases and the number of manufacturers operating is expected to double later.

In 2015 and 2016, the government said that it was hoping to create one million new jobs and set up 45 such zones. Senasinghe said the government would spend Rs.3.5 billion to develop infrastructure for the EPZ and would in return gain shares in the EPZ holding company in Sri Lanka.

“The number of shares is still under discussion,” he said, but noted that Rojana will give back the entirety of the project to Sri Lanka after 50 years, which is positive, given the 99-year leases, which have become the standard for foreign projects in Sri Lanka.” He said that the state is providing 400 acres initially due to the high costs and delays in sourcing land and developing infrastructure for 1,000 acres within the project timeline.

“We’re hoping to finish the approvals and construct the infrastructure within one year and have the project ready by end-2018. I know it’s an ambitious target. Maybe we won’t achieve it, but we will try,” Senasinghe said.

All heads of government institutions involved in the approval and facilitation process for the EPZ and private sector consultants—who were in attendance at the ceremony yesterday—are meeting on a weekly basis to cut through the bureaucratic red tape to meet the end-2018 target, according to the minister.

“Usually such a process would take four to five years. But just like how Minister Gamini Dissanayake finished the 30-year Mahaweli Project in seven years, we will also try to fast track this,” Senasinghe said, but stressed that the EPZ will adhere to all environmental regulations and be eco-friendly. Rojana Director Chai Vinichbutr said that Sri Lanka is ideal for industries in Thailand to relocate to, given increasing competitiveness in manufacturing within Thailand, the slightly lower labour costs in Sri Lanka and most importantly the country’s connectivity.

China too is pushing its industrial juggernauts to relocate some of its operations to Sri Lanka, for similar reasons. Senasinghe said that given the hot political climate the government is currently dealing with Rojana’s commitment is a positive development. He added that the manufacturers at the EPZ could leverage Sri Lanka’s growing trade pacts to export products or sell in the local market. Vinichbutr said that Rojana will pitch the EPZ to its 500 strong client portfolio, which includes major Japanese industrials. He noted that initial manufacturing will mainly be electronics, while later expanding into the automobile industry.

He stressed that the US $ 500 million investment would also depend on whether a power plant would be constructed within the Milleniya EPZ, without which the investment could be lower initially. The government estimates the future energy demand of the EPZ to be 25MW. Senasinghe said whether the EPZ would depend on the national power grid or through its own power plant, would depend on the government policy. The eventual 10,000 cubic metres of water demand for the EPZ will be provided through the Kalu Ganga Water Supply Scheme, according to the government. Rojana has expertise in waste disposal.

The firm is a Thai-Japanese joint venture founded in 1988 by the Vinichbutr Group and Nippon Steel & Sumikin Bussan Corporation.