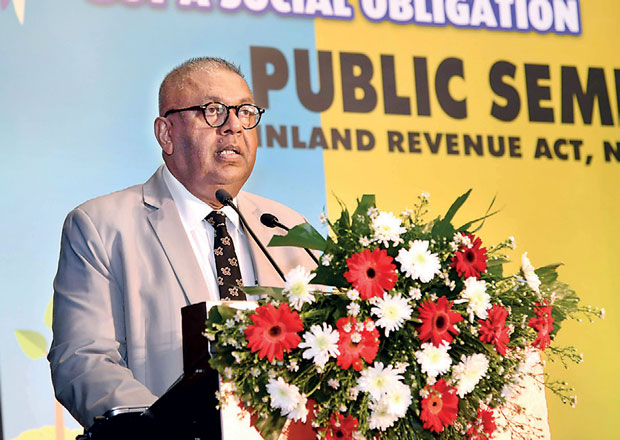 By Chandeepa Wettasinghe
The Sri Lankan government yesterday kept mum on the possible outcome of its failure to implement a cost-reflective energy pricing reform in the coming months as part of the US $ 1.5 billion balance of payments support programme with the International Monetary Fund (IMF).

Finance and Mass Media Minister Mangala Samaraweera yesterday refused to answer a question Mirror Business raised on whether the government has discussed with the IMF on further delays to implementing the pricing mechanisms and the fallout Sri Lanka would face from such a move.

Speaking on the sidelines of a seminar organised by his ministry on the new Inland Revenue Act held at Galadari Hotel in Colombo, the minister said he cannot guarantee a timeline for implementing the reforms.

“I can’t give you a date but we are looking at them (formulas),” Samaraweera said in response to a question on whether the formulas would be implemented on time.

According to the revised targets in the IMF arrangement, the fuel pricing mechanism has to come into effect this month, while the formula for electricity has to be in place by September this year, after the government failed to implement them under the initial target of December 2016.

Late last year, the IMF said that until the reforms are implemented, Sri Lanka would remain vulnerable to a debt shock, which would increase the government gearing by around 900 basis points to 94 percent of gross domestic product and remain at such a high level over the medium term.

Even in the recent Mission statement that followed the Article IV consultations, the IMF said the “energy pricing reforms are a priority to contain fiscal risks from state-owned enterprises”.

The IMF has understood the possible inflationary pressures that may arise from implementing cost-reflective formula in an environment where fuel prices have risen compared to when the government last slashed energy prices and said the “targeted social transfer programmes can help to mitigate the distributional impact of these reforms”.

Slashing energy prices had been a key campaign slogan for the government.

Analysts note that the government has no political room to introduce the formulae in the run up to the presidential and general elections in 2019 and 2020, respectively, after the upset it experienced in the local government polls this February.

Stagflation, with reducing growth coupled with high inflation in 2017, owing to the weather-related interruptions to economic activities, was observed to have soured the public opinion on the government.

The key economic concerns among the majority of Sri Lankans have always been the rising cost of living and what subsidies the government would provide to relieve them of such pressure, while the government over the last year had focused on tight fiscal and monetary policies to bring stability to the country’s macroeconomic indicators, under the IMF programme.

Academics have pointed out that the government had not been able to bring in the full suite of economic reforms required during the past three years when the economy had stagnated and during the height of the popularity when they were elected, which would have resulted in economic dividends by the end of the current election cycle.

Some, such as Institute of Policy Studies Chairman Professor Razeen Sally, still believe there is a narrow window to implement easy reforms and gain dividends for this government to remain in power.
National Policies and Economic Affairs State Minister Dr. Harsha de Silva before the  local government polls had said that gains in reconciliation and international relations are worth sacrificing economic objectives, after the polls said that balancing the competing interests has become challenging.

He had said that the government may not be able to bring about the best possible or even the second best possible solution and may have to settle for the third best solution and that economic reforms would be even slower going forward.

Samaraweera yesterday said that he would be increasing the social safety nets holding up the lower strata of the economy.

“As you would appreciate, our government has implemented an array of subsidies and transfers for low income groups and we hope to strengthen the social safety net for the poor and the less fortunate further this year,” he said.

When questioned on how the government would achieve this when the country has to meet strict fiscal deficit targets, Samaraweera said that this would remain a challenge.

“We are increasing the safety net, while keeping the budget deficit challenge in mind. While we are further liberalizing the economy, those at the lower levels may face difficulties. We are currently in discussions with the World Bank to launch a programme to strengthen the social safety net,” he said.