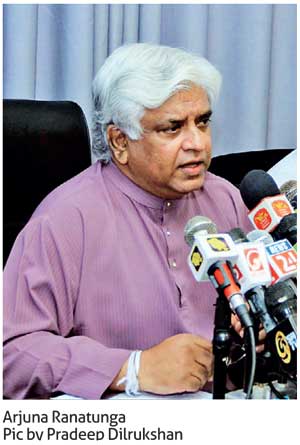 The Sri Lankan government has not yet fully committed to the implementation of a cost-reflective fuel pricing formula and is leaning towards maintaining current subsidised prices, Petroleum Resource Development Minister Arjuna Ranatunga told a press conference yesterday.

“The Finance Ministry wants to reduce its losses but what I’m looking at is that there are some companies which can be run at a profit. Some companies should be run for the people, like a social service, despite making losses.

According to Ceylon Petroleum Corporation (CEYPETCO) officials present yesterday, CEYPETCO has made an operational profit of Rs.5 billion in 2017 and a net loss due to recovery in oil prices, while in 2016 during low oil prices, the operational profit was Rs. 67.1 billion and the net profit was Rs. 62.8 billion. CEYPETCO only makes profits with sales of jet fuel, with petrol, diesel and kerosene being subsidised.

With the increase in global oil prices in recent months, Lanka IOC, which is the only competitor to the state-owned CEYPETCO, requested the government to increase prices to maintain margins.

However, according to Ranatunga, the government at this point in time is not supportive of a price increase in petroleum.

“I think the government is not very keen on increasing the prices,” he said.

However, Ranatunga said that a pricing mechanism is also required, creating some confusion. “I think that (a pricing formula) should come in, but ultimately we as a government have to sit together and take this decision. We might consider that in the future. It shouldn’t be something that I implement but something that is implemented at the right time,” he said. With key national elections coming up in 2019 and 2020, there is speculation that the ‘right time’ will not appear over the next two years.

Petroleum Resource Development Ministry Secretary Upali Marasinghe yesterday said that a pricing formula is essential if CEYPETCO is to remain sustainable.
The Finance Ministry had promised the International Monetary Fund to implement a cost reflective price formula for fuel by March 2018, and a similar mechanism for electricity by September 2018 as a condition for the US$ 1.5 billion loan taken for balance of payment support, after failing to implement the formulas in December 2016 as originally envisaged.

Ranatunga yesterday said that the government has not undertaken even one step towards formulating the pricing mechanism, since the Cabinet first has to approve the exploration of such a mechanism.

However, according to the CEYPETCO 2017 Action Plan, a formula which ‘is more equitably applicable to Sri Lanka’s economy, fuel consumers as well as the petroleum sector’ was developed by a committee of experts in 2015 and submitted to the cabinet, where it has been held pending ‘further consideration’ throughout 2016.

In early 2017, the then Finance Minister Ravi Karunanayake had said that a pricing formula was submitted to the Cabinet but it was shot down since it had not met the government expectations.  According to the IMF, without pricing mechanisms for electricity and fuel, Sri Lanka would remain vulnerable to a massive debt shock.