Fitch Ratings Lanka Chief Executive and Country Head Maninda Wickramasinghe last week said Sri Lanka has too many banks, insurance and finance companies, much more than the country needs and the proliferation of such companies has left scant scope for efficient use of the limited capital in the country. 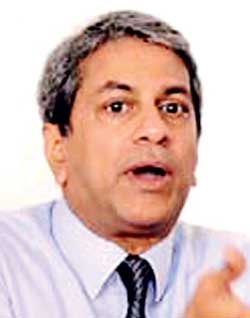 “Does Sri Lanka need 25 insurance companies, 58 finance companies and so many banks? I mean, do we really need them?” he asked a gathering of professional management accountants last week at a seminar organised by the Institute of Certified Management Accountants of Sri Lanka (CMA).

Fitch Ratings Lanka rates a large number of financial institutions operating in Sri Lanka and has maintained an unblemished track record since it started operations close to two decades ago.
Wickramasinghe said Sri Lanka is a country starving for capital and consolidation would lead to efficient use of the limited capital.

He cited recent regulator-driven segregation of the composite insurance business in Sri Lanka, which led to widespread mergers and acquisitions in the general insurance industry.

The latest such merger was the sale of the general insurance business by Janashakthi Insurance PLC to the local unit of the German insurance giant, Allianze S.E, in a blockbuster deal valued at Rs.16.4 billion.

“The economy needs capital. This is a country where you need capital. We are starved for capital. Everybody is replicating because they are like low hanging fruits. But it’s time that these industries consolidated.

You don’t need that many institutions in all these areas and that capital can be re-deployed into far more productive areas,” Wickramasinghe told the seminar titled ‘How Important Ratings are in a Capital Market’.

In the banking sector, Sri Lanka’s Central Bank raised the minimum capital of a bank to Rs.20 billion from the existing Rs.10 billion, which will force some of the smaller lenders to find merger partners or merge with licensed finance companies to look bigger.

In 2015, Sri Lanka abandoned a regulator-driven consolidation in the banking and finance sectors, which intended at forming five big lenders with assets over a trillion rupees and less than 20 licensed finance companies – a healthy number of financial sector firms for a country of 21 million population.