A 10.5% increase in industrial exports pushed up overall March exports by 6.3% to $ 1.1 billion, helping to bring the trade deficit below $ 1 billion and posting a 7.7% rise in exports to $ 2.9 billion for the first quarter of 2018, the Central Bank said yesterday.

Earnings from industrial exports chiefly contributed towards the growth in export earnings. Apparel exports grew 7.4% to $ 486 million, rubber products grew 11.8% to $ 85.8 million and gems and jewellery grew 91.9% to $ 38.7 million.

Under industrial exports, earnings from garment exports recorded the highest value for a month since November 2013 mainly due to the increase in garment exports to the US, despite a marginal reduction of exports to the EU. Export earnings from gems, diamonds and jewellery increased significantly in March 2018 mainly owing to a higher performance registered in gem exports.

An increase in the export of vegetable, fruit and nut preparations resulted in an increase in export earnings from food, beverages and tobacco. Meanwhile, machinery and mechanical appliances increased during the month led by electronic equipment. However, earnings from transport equipment declined in March 2018 reflecting the base effect as several yachts were exported during March 2017.

Meanwhile, all subcategories under agricultural exports, except for tea and unmanufactured tobacco, declined in March 2018. Tea export earnings increased due to the combined effect of the high prices and volumes exported.

Meanwhile, lower volumes of cloves and cinnamon exported resulted in a decline in earnings from spices. Earnings from coconut exports also declined during the month due to the drop in exported volumes of desiccated coconut and coconut oil categorised under kernel products. This decline came from the lower production of coconut due to the lag effect of adverse weather conditions. The leading markets for merchandise exports of Sri Lanka, in March 2018, were the US, the UK, India, Germany and Italy accounting for about 52% of total exports.

Meanwhile, expenditure on gold imports continued to increase, reaching a record high level in March 2018. However, expenditure on base metals declined mainly due to lower iron and steel imports. Expenditure on textiles and textile articles also declined during the month mainly as a result of lower imports of fabric. In the consumer goods category, expenditure on personal vehicle imports in March 2018 increased more than twofold compared to the corresponding month of 2017, reflecting the increase in the importation of small petrol cars and hybrid vehicles. Despite the reduction registered in average import prices, import expenditure on sugar increased owing to the high volumes imported.

However, import expenditure on rice declined with the increased availability of rice stocks in the domestic market following a healthy harvest during the Maha season. Accordingly, imported volumes of rice declined significantly to 71 million kilograms in March 2018 from 140 million kilograms from the corresponding month of the previous year.

Meanwhile, imports within almost all subcategories in the investment goods category declined during the month. India, China, Japan, the UAE and Singapore were the main import origins in March 2018, accounting for about 53% of total imports.

Foreign investments in the CSE, including both secondary and primary market foreign exchange flows, recorded a net outflow of $ 35.7 million during March 2018. This outflow from the CSE was mainly due to a one-off transaction by a foreign investor of a Sri Lankan conglomerate divesting the stake of that company.

Consequently, cumulative net inflows to the CSE in the first quarter of 2018 amounted to $ 18.8 million. Meanwhile, the government securities market (Treasury bills and bonds) also recorded a net foreign investment outflow of $ 18.1 million in March 2018, thus raising the net cumulative outflow to $ 26.3 million by end March 2018.

Further, long-term loans to the Government recorded a net outflow of $ 58.6 million during March 2018 as loan repayments during the month exceeded loan inflows. 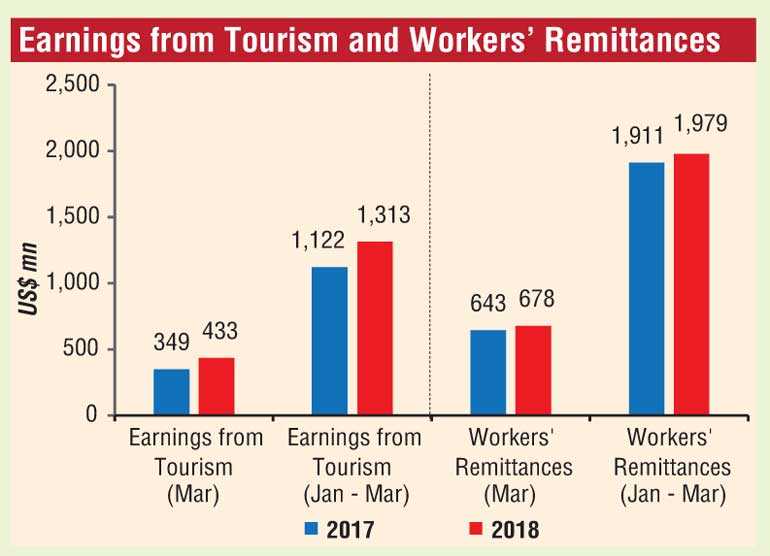 â€‹Earnings from tourism in March are estimated at $433 million, with cumulative earnings amounting to $1,313 million during the first quarter of 2018.