State Minister of Finance Eran Wickramaratne is to discuss the transparent price mechanism for fuel with the International Monetary Fund (IMF) on the side-lines of its Spring Meetings in Washington, after the Government missed a previous deadline to implement it in March. 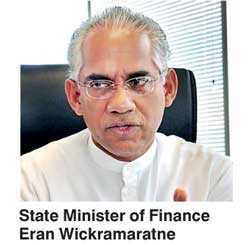 The State Minister will be part of the Sri Lankan delegation that will participate at the meetings in Washington, where they are also expected to meet with IMF officials to discuss how the proposed transparent pricing formulas for fuel and electricity could be managed. The meetings have been scheduled to start on 20 April.

“I will discuss the issue with IMF officials and we will try to work out alternatives on how to proceed,” Wickramaratne told Daily FT. He also noted that the Government would be open to discussing other structural changes or shifting of goal posts, to ensure that the $1.5 billion Extended Fund Facility (EFF) remained on track.  “We are committed to continuing our engagement with the IMF and are positive that we can find a way forward.”

However, following reports of the Ceylon Petroleum Corporation (CPC) losing Rs. 266 million each week, Finance Ministry Secretary Dr. R. H. S Samaratunga had said the Government was working on a pricing formula, which would be submitted to Cabinet after discussions between the Finance and Petroleum Ministries are concluded.

Central Bank Governor Dr. Indrajit Coomaraswamy also joined the voices for a pricing formula, pointing out that market conditions were positive, especially given moderate inflation and projections that international prices would taper off in the medium term.  “The pricing formula should really come in, because this is the time to do it. All the other factors related to inflation are favourable: even food-related inflation is coming down. It’s a political decision that has to be made, but in my view the earlier the better, and it is a politically astute time to do it now, because even with the introduction of the pricing formula, inflation will remain within 4%-6% and the expectation is that oil prices may ease going forward. So all that argues for doing this earlier rather than later, and it is important for budgetary requirements.”

The International Monetary Fund (IMF), in its evaluation report released in August 2017, said it is working to put automatic fuel and electricity pricing mechanism measures back on track with the Sri Lankan Government, with the one for fuel to be rolled out by March 2018.

At the time, the Staff Report noted that commitments made earlier on automatic pricing for fuel and power had not been implemented by the Government. CPC and the Ceylon Electricity Board (CEB) will be two key State-run enterprises that will be subjected to reforms.

“The structural benchmark for establishing automatic fuel and electricity pricing mechanisms has not been met. We are pursuing a sequence of steps to put the reform process back on track. First, we will complete a report outlining the cost of non-commercial obligations for fuel and electricity by September 2017 (new structural benchmark), supported by IMF Technical Assistance.”

The report also said the CEB and the Public Utility Commission will establish a Bulk Supply Transactions Account to correctly estimate the cost of non-commercial obligations for electricity, and start using it to settle transactions between generators, the transmission operator, and distributors, as specified in the November 2015 tariff methodology, by March 2018. However, it is unclear whether this has been implemented. This would be a new structural benchmark.

“Second, once the extent of the non-commercial obligations for fuel and electricity is known, we will explicitly account for them in our program targets, beginning in the third review. Finally, to reduce the possibility of future financial losses by the CPC and the CEB, and avoid large ad hoc adjustments in retail prices, while allowing time for public consultation and education, we will obtain Cabinet approval of the automatic pricing mechanism for fuel by March 2018, and for electricity by September 2018,” the report added.

The report went onto say that the financial performance of the CPC and the CEB will be reported on a quarterly basis to monitor progress, which will be in accordance with the Technical Memorandum of Understanding.