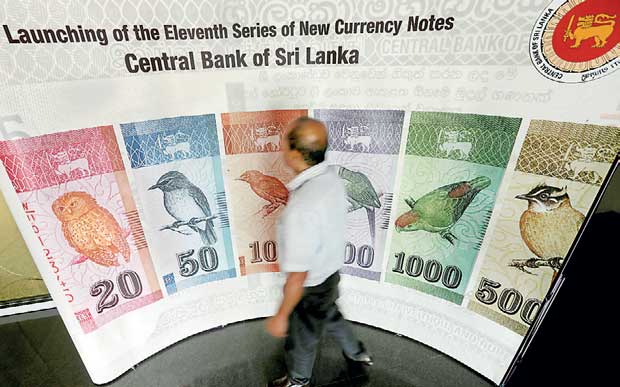 Credit extended to Sri Lanka’s private sector by the country’s financial system throughout 2016 reached an all-time high of Rs.755.5 billion, surpassing the previous highest of Rs.692 billion in 2015, Central Bank data showed.
This translates into a 21.9 percent growth in private credit in 2016, which is somewhat higher than what the authorities would have expected i.e. below 20 percent.
These numbers on private sector credit defy all forms of monetary and fiscal tightening measures taken by the Central Bank and the Treasury from late 2015.  What is also baffling is during the last two months alone the financial sector has granted as much as Rs.160.5 billion – Rs.81.2 billion in November and Rs.79.3 billion in December – surpassing even previous highest monthly disbursements in 2016. When the budget pumps excess demand, it has to be accommodated through printed money creating liquidity for the banks to lend over and above what they raise from the deposits and these moneys fuel the demand for imports and inflation.
The last two months’ numbers will certainly question the efficacy of the monetary policy actions and the credibility of the claims of the proverbial 12 to 18 months lag effect.
But the Monetary Board said yesterday, “The economy is gradually responding to the stabilisation measures adopted by the Central Bank and the government since late 2015”.
Hence the Monetary Board yesterday announced its decision to leave the key policy rates unchanged for the sixth consecutive month, keeping the Standing Lending Facility Rate (SLFR) at 8.5 percent and Standing Deposit Facility Rate (SDFR) at 7.0 percent.
The Monetary Board also left the banks’ statutory reserves ratio at 7.50 percent since it was raised by 150 basis points over a year ago.

Nevertheless, the Monetary Board did not completely rule out the possibility of further tightening measures as it said, “Close monitoring of macroeconomic developments is necessary in the period ahead, with a view to adopting further corrective measures, if required”.
Rising consumer prices may have pushed some members of the Monetary Board to advocate a hike in rates but the recent move towards flexible inflation targeting framework with a medium term view would have forced them to wait a bit more.
The core-inflation, the underline rate of inflation in an economy, reached a multi-year high of 7.0 percent in January 2017 due to supply side constraints such as drought and also the recent tax adjustments.
“It is anticipated that the growth of monetary and credit aggregates would gradually moderate during 2017, towards a level consistent with the anticipated real economic growth and mid-single digit inflation”, the Monetary Board said.
Meanwhile, the gross official reserves have also depleted by a half a billion dollars during January to US $ 5.5 billion from US $ 6.0 billion in December 2016. The rupee has also taken beating of 0.5 percent against the dollar after it weakened by 3.8 percent in 2016.
The foreign outflows from the government securities market is continuing while the import expenditure has been steadily rising amid dismal export earnings.  Prospects for foreign direct investments also remain dim.
Sri Lanka’s economy is now in a tailspin despite the prospects for the global economy improving as past myopic policies by domestic policy makers have now started to backfire.