You are here: Home / Business Now / Cohabitation at crossroads after LG polls defeat 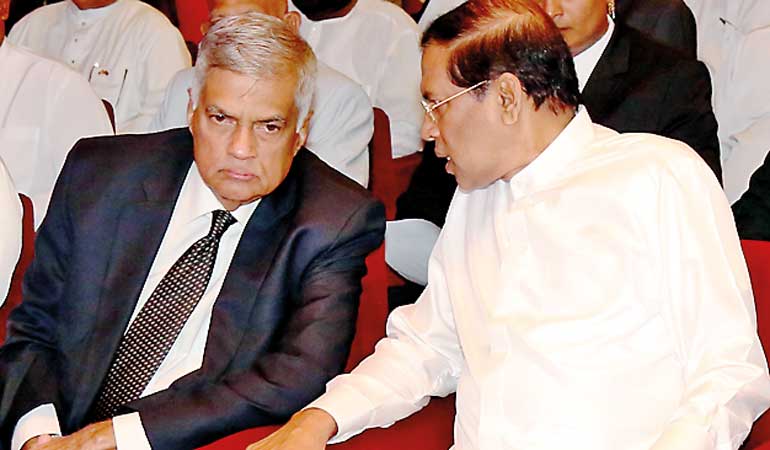 Confusion reigned yesterday after reports surfaced that the United National Party, the main stakeholder in the ruling coalition was exploring options to govern independently and show a majority in Parliament, drawing a swift denial from President Maithripala Sirisena that agreements to this effect had been reached with his Prime Minister.

Reports about the UNP moves to go solo following the local government election results, claimed that President Sirisena had approved the party’s plan and asked the Prime Minister to show a majority in Parliament, and even agreed to tell SLFP ministers willing to stay on in the Government to extend support to Prime Minister Ranil Wickremesinghe.

“There have been no agreements reached with the Prime Minister on governing local councils or future political activities,” the Presidential Media Division said issuing a denial just hours later.

President Sirisena and Prime Minister Wickremesinghe met for late night talks at Paget Road, Daily FT learns, in a bid to make crucial decisions about how to move forward as a National Unity Government after the landslide win by the pro-Rajapaksa Sri Lanka Podujana Peramuna (SLPP) in elections over the weekend.

The two leaders will continue to meet in the coming days until decisions can be made on the way forward, authoritative sources with knowledge of the discussions told Daily FT.

The ruling coalition was plunged into crisis after both the UNP and the SLFP got a humiliating drubbing in last Saturday’s local government election at the hands of the fledgling SLPP backed by former President Mahinda Rajapaksa. A bitter and acrimonious polls campaign had already laid bare the fractured and chaotic relationship between the two main parties in the ruling coalition.

SLFP Ministers in the Government had demanded the removal of Prime Minister Wickremesinghe as a condition to remaining within the ruling coalition, at a meeting with President Sirisenaon Sunday (11), Daily FT learns. The Ministers blamed Premier Wickremesinghe’s poor leadership for its own miserable fortunes at the LG election, it is learnt.

But the President was deep in soul-searching mode after the SLFP took a huge beating under his leadership in Saturday’s local council election which has left him wondering how to deliver on his original ‘January 8 mandate’, sources close to President Sirisena told Daily FT last night.

The UNP were favourites to win Saturday’s local government election, a seat based contest for control of 314 local governing bodies, but its shock defeat has renewed an internal agitation about party leadership. The subject was broached at a meeting between the Premier and the UNP Deputy Ministers and State Ministers yesterday, authoritative sources told Daily FT.

Meanwhile, another faction of the party has stepped up calls for the UNP to abandon the National Unity coalition and strike out on its own by showing a parliamentary majority. If the UNP goes solo, the party would be forced to govern with a cabinet of only 30 ministers, under the provisions of the 19th Amendment. Fears that President Sirisena would sack his Prime Minister in the aftermath of the shock election result in a bid to appease his SLFP which suffered an even worse electoral defeat, has made senior UNP members jittery, highly placed party sources told Daily FT.

Aides to both leaders say mistrust and bitterness that erupted on the campaign trail in the run up to last Saturday’s local council election has deepened after the SLPP sweep of the councils revealed an electorate deeply disillusioned with the policies of the ruling coalition. Both leaders realize that unless ‘radical’ changes are made in how the country is governed, the road to victory in a presidential contest in 2019 will not be easy for the January 8th coalition – whether it contests together or not, the aides said.

But since cumulative results tallying the votes obtained by all parties that backed the common candidacy of President Sirisena in 2015 still outnumber the votes the SLPP was able to muster – strong attempts are also underway to find resolution and renew trust between the UNP and SLFP now that the polls campaign is over, Daily FT learns. President Sirisena and Prime Minister Wickremesinghe who met last night also had relatively cordial talks on Sunday evening it is learnt.

The UNP and SLFP that is governing together nationally need to find a way to work together if they want to sustain majorities to govern local councils they won, or risk the SLPP forming governing alliances, analysts and worried aides told Daily FT. Outright majorities in many of the councils won – by both the UNP and the SLPP – have not been obtained, which will force the parties to form coalitions to govern at local level.

“The uncertainty after the defeat brought down the market. Investors will wait to see some stability and directions on how both the coalition partners are going to go forward with a stable government,” said Acuity Stockbroker Chief Executive Officer Prashan Fernando.

The surprise win by a political party backed by former president Mahinda Rajapaksa, who lost the presidential poll in 2015, could undermine the island nation’s unity government and its reform agenda, analysts said.

Rajapaksa’s Sri Lanka Podujana Peramuna (SLPP) won control of 231 local councils out of a total 340, while Wickremesinghe’s centre-right United National Party (UNP) took 34 councils and the rest were split among other parties.

Rajapaksa yesterday called for parliament to be dissolved and fresh elections to be held after the party he backed swept local council polls in the strongest rebuff yet to the unity government.

Foreign investors, however, bought a net Rs. 289.2 million worth of shares yesterday, extending the year-to-date net foreign inflow to Rs. 5.3 billion worth of equities.

The markets will be closed for a public holiday today. Normal trading will resume tomorrow.