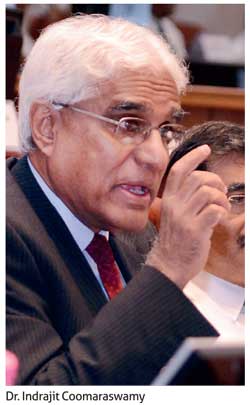 Sri Lanka could run the risk of defaulting on its loan payments during the next four-year period, if fiscal policy is loosened drastically, according to Central Bank Governor Dr. Indrajit Coomaraswamy.

“To be frank, there isn’t scope at all to loosen fiscal policy. The fiscal consolidation trajectory that was built  into the government’s 3-year mid-term budgetary framework; you can go up a little bit, it’s okay but basically if you go beyond that framework, it would be very challenging in terms of managing the debt dynamics,” he said.

The situation has become complicated after the parties comprising of the incumbent unity government lost the local government elections a fortnight ago, which the government said was a necessary reality check on how the people view the government.

Sri Lankans, who are traditionally used to populist hand-outs, were disillusioned by the government which delayed promised political, economic and social reforms and election promises made in 2015, with the good governance platform of the government instead making way for one of the biggest government securities scandals, which has been linked to government insiders.

Further, the government was unable to significantly cut down the cost of living with subsidies due to the necessary fiscal and monetary discipline to face the upcoming debt repayment cycle, although politicians continued their hedonistic lifestyles.

As reported on Mirror Business, analysts have now called for the government to rethink its delayed reform timeframe, due to the short-term pains and long-term gains. The government has to stay in power in the 2020 elections to continue the reform agenda. The future of the government has remained uncertain since the election outcome.

Whether the government will default on debt repayments would depend on the extent to which populist policies would be implemented, if it isn’t able to immediately create political stability, according to Dr. Coomaraswamy.

“It depends how much (fiscal) slippage there is. The faster we can get political stability, the better,” he said.

The Central Bank has prided itself in its role in ensuring that Sri Lanka has never defaulted on its sovereign debt.

Dr. Coomaraswamy meanwhile said that if the political situation leads to loosening of fiscal policy, the Central Bank would have to lean against that by tightening monetary policy.

The state revenue is not yet enough to meet its recurrent expenditure, with the government having to resort to further debt.

Dr. Coomaraswamy too noted how strengthening of the global economy, and rising rates in advanced economies are inducing investors to channel their finances to advanced economies, which was one of the reasons why the Central Bank did not cut policy rates last week, despite stability in the economy and disappointing growth.

Sri Lanka is now in one of the worst debt servicing cycles, with domestic debt servicing hitting a peak this year, and foreign debt servicing to spike from 2019 to 2022 with over US$ 3 billion in repayments each year— around double the norm over the past few years. The Central Bank has been building buffers against these debt spikes, with additional debt financing raised in the domestic market for the rupee maturities, and around US$ 150-200 million in dollars purchased from the domestic financial system each month for dollar repayments.

The Central Bank is hoping to build its foreign reserves up to US$ 10 billion this year.

The government has approved plans to raise US$ 5 billion in debt this year, with a US$ 2 billion sovereign bond set to be issued as soon as the Central Bank sees fit.