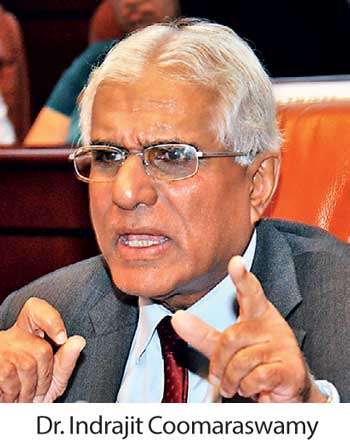 The Central Bank has urged the government to put more weight on factor market reforms, improving investment climate and capitalising the country’s geographical location through trade policy in order to boost future economic growth, as the relationship between credit growth and economic expansion is on a weakening trend, while the loosening of monetary policy is not an option considering the current global environment as well as Sri Lanka’s deteriorating trade deficit.

Addressing the monetary policy review press conference last Friday, the Central Bank Governor, Dr. Indrajit Coomaraswamy asserted that with a deteriorating trade deficit and a current account deficit amid rising international rates, it is not prudent for Sri Lanka to relax its monetary policy for short-lived consumption-led economic boost.

“If we were to compress our interest rates, the difference between ourselves and the benchmark U.S. Treasury rates would lead to an acceleration of outflows from the rupee denominated treasury market where there is little of more than US $2 billion.

If you loosen the monetary policy when trade deficit is worsening or the current account is deteriorating, clearly you could play into a BOP crisis,” Dr. Coomaraswamy pointed out.

Moreover, he noted that a recent study carried out by the Central Bank’s Economic Research Department under the guidance of Senior Deputy Governor, Dr. P. Nandalal Weerasinghe, has found that the relationship between credit growth and economic expansion had been weakening.

“So the reason for low growth is not cost of finance. There are many  other things such as confidence in the country, sentiment on expectations, structural problems etc. which need to be addressed,” he stressed.

The Central Bank chief acknowledged that the 5 percent growth target for the year has become “a very ambitious target” considering the 3.2 percent growth recorded for the first quarter of this year.

Hence, he noted that the Central Bank is likely to revise down the growth outlook to 4-4.5 percent at the next monetary policy announcement media briefing. However, Dr. Coomaraswamy was confident that the economic growth will pick up during the second half of the year.

He also ruled out any monetary policy relaxation due to political pressure as next election cycle is approaching, and stressed that the Central Bank is engaged in a data-driven monetary policy.

“If you look at inflation which is running around 4 percent, growth is little over 3 percent while nominal GDP is growing at about 8 percent. Yet the credit growth comes to around 15 percent, so there’s plenty of money, there are no tightness in terms of availability of money,” he reiterated.

The Governor pointed at the fact that the Sri Lankan economy had grown at a much faster rate with much high interest rates in the past, and in some instances the high credit growth necessarily didn’t result in high growth.

“For instance, when inflation was 10 percent, you had interest rates well above what they are now. Yet there was  higher growth and not only that, if you look at the first half of 2016, there was a credit growth of 28 percent, and the growth was still less than 4 percent,” he noted.

However, Dr. Coomaraswamy admitted that liquidity conditions are currently tight and vowed to address the tightness of the liquidity in the market through the Central Bank’s open market operations.

Meanwhile, he announced that the Central Bank is in the process of putting in place a new framework for data collection to determine speculative depreciation in forex markets.

“Even with the data we have, it’s hard to separate the speculative depreciation from fundamentals. We are now putting in place a framework for data collection,” he said.

The Central Bank has intervened in the domestic forex market to address the speculative behaviour and the unwarranted volatility in the exchange rate, and absorbed US $141 million net foreign exchange in the first half of 2018 in defending the currency.

The rupee has depreciated 3.6 percent again the U.S dollar so far this year.

The Central Bank expects the inflation would remain at the desired mid-single digit levels during the remainder of the year and over the medium term, supported by appropriate policy adjustments.