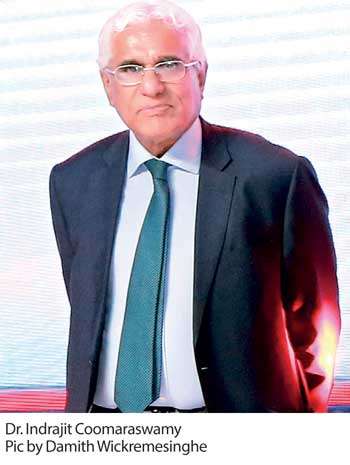 He was speaking at “Lankapay Technovation Awards 2018” in Colombo last Thursday.

He pointed out that exchange rate has been under pressure due to external factors, while noting that the other key macroeconomic indicators are within the targets. Hence, he emphasised that it’s not logical to evaluate the health of the whole economy by the performance of the Rupee.

Dr. Coomaraswamy stressed that CBSL would look at all options to get the best possible mix of tools to manage the exchange rate. He noted that an interest rate hike also remains an option, however, he said that Monetary Board of CBSL doesn’t feel it’s timely to increase interest rates as the economy growth remains subdued despite the uptick in the second quarter.

“A number of countries have tried to defend their currency by increasing the interest rate; however, monetary board of CBSL so far has not thought it’s appropriate to increase interest rates, because the growth has been subdued in the economy. It’s not timely to tighten the monetary policy, however, it’s an option out there in the toolkit, if it becomes necessary,” he elaborated.

The governor noted that CBSL has decided to manage the exchange rate in a flexible way as the CBSL learnt from the past mistakes made by successive governments trying to defend the currency.

“Over US$ 4 billion spent on defending the currency in 2011-2012. However in the end, we had to let the rupee depreciate by 13 percent. Therefore, we lost much of the reserves and the currency depreciated anyhow.

Similarly, in 2016, US$ 2.1 billion was spent trying to defend the currency and it ended up getting depreciated by 9 percent. Trying to spend large amounts of reserves defending the currency simply is not worth it,” he elaborated.

However, he said that the Sri Lankan rupee has depreciated only by 8.2 percent similar to Australia so far during the year, faring better than the Indian rupee, Turkish lira and Argentine peso which had double digit depreciation.