You are here: Home / Business Now / CCC says stability of economy to continue in 2018 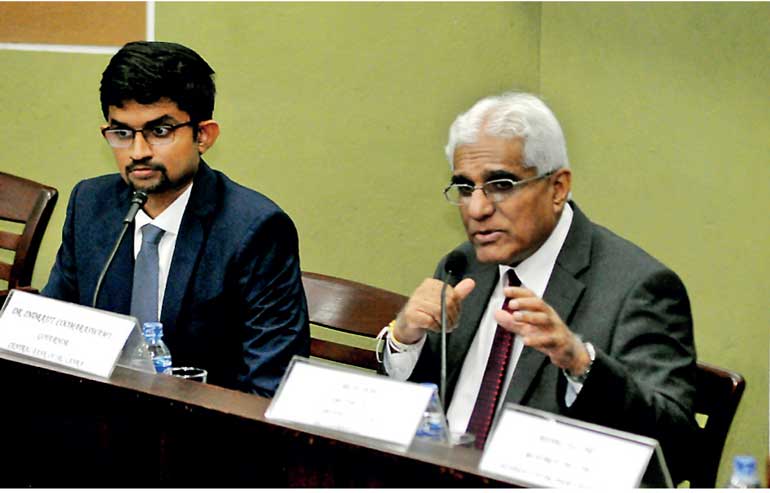 The Ceylon Chamber of Commerce (CCC) in its Economic Outlook for 2018 forecasted a 4.5% economic growth based on a progressive macroeconomic picture, while insisting that the country should continue structural reforms, capitalising on opportunities.

“Stability of the economy is likely to continue into 2018. We are looking at 4.5% GDP growth next year supported by base effects. Investments and exports will be the catalysts for growth, which is likely to be seen from the second half of the year,” CCC Chief Economist Shiran Fernando said at a seminar organised by the Chamber titled ‘Building on Stability: Economic + Sector Review and Outlook 2018’ yesterday.

On a positive note on the macro front, he said the stable macro environment with better policy direction was expected to provide more confidence to investors. “For the first time we see a nexus between policy documents — Vision 2025, National Budget 2018 and Prime Minister’s Economic Policy Statement,” he stressed.

In terms of building on what’s really necessary right now for the economy, he emphasised on quality growth coupled with stability and navigating external risks, adding that Sri Lanka “cannot miss the bus” in 2018.

“Getting Budget 2018 implemented to restore credibility and for reforms to continue at the current pace is important. The economy remains vulnerable to the environment, particularly beyond 2018 and thus steps to create a buffer will help manage external risks,” he stressed.

He said they expected inflation to be around 5% to 7% largely dependent on supply-side shocks and pricing formula. On the fiscal side, given that there are more realistic proposals, he expressed confidence that the fiscal deficit would drop below 5% in 2018.

Noting that there was synchronised growth in many countries which were not only growing but also accelerating their growth, Fernando asserted that Sri Lanka should build on that stability.

He also said emerging markets like Sri Lanka recorded a significant number of portfolio investments last year from fund flows from developed markets, given the stability in their economies.

Acknowledging that stability had been even derived on the external side, it was highlighted that reserves had ticked up by 1.9 billion in 2017 – an important factor in restoring credibility, especially among foreign investors, as a key economic indicator of where the economy is heading next.

Pointing out that construction, financial services and real estate were the top three contributors to the change in GDP during the first nine months of last year, Fernando asserted it was necessary for Sri Lanka to conduct an analysis of where this growth was coming through as the economy clearly needed new growth dynamics to support 2018 growth and beyond.

He noted that the uptick in Foreign Direct Investments (FDIs) augured well for 2018, but was still relatively low.

In terms of trade, he said: “There are many policy and regulatory changes in the pipeline for 2018, which includes the WTO Trade Facilitation Agreement, trade agreements with India, China, and Singapore, National Trade Policy, National Export Strategy, new Customs Ordinance, Anti-Dumping Bill, a trade adjustment package and amendments to the Immigration and Emigration Act. A lot of reforms need to be done in 2018, which is critical to promote our exports from 11.4 billion in 2017.”

Underscoring headwinds that could derail stability, he said the economy needed to keep a close tab on the rise in global oil prices. “In 2016, the price of an oil barrel was in the range of $30 to $35 and now it has almost doubled to $65 to $70. The benefit we had from low oil prices can no longer be sustained,” he cautioned.

Tightening financial conditions, environmental concerns, political instability and delay in reforms were also highlighted as other risks the country needed to focus on tackling. “Not all is very rosy, I think the stability is quite fragile,” he added.

In terms of foreign debt servicing requirements, Fernando said 2018 was the year in which the country could create a buffer to face the headwinds from 2019 to 2021. “In 2015 we didn’t have a plan but now it is quite clear to investors that there is a debt crunch and the Central Bank is taking a more proactive role to mitigate any adverse impact.”

From a sector perspective, he said consumption was quite low in 2017, as the economy was still adjusting from the rupee impact and from high interest rates. Consumer spending which was expected to recover post 2015/2016 is projected to pick up in 2018 with the economy stabilising and sectors related to consumer behaviour doing better.

Economy has stabilised amid many challenges: PM

Prime Minister Ranil Wickremesinghe said the current unity Government had been able to repay loans and stabilise the economy amid many challenges.

Addressing an election rally held in Nikaweratiya on 21 January in support of the United National Party (UNP) candidates for the Local Government election in the area, Wickremesinghe said the present regime took over a bankrupt economy without any future.

Expressing his views, Wickremesinghe said that since there had been no real development or income during the previous regime, the Government had to borrow excessively and its income was not enough to pay the debt by 2013. Therefore, the previous Government went for a failed election bid in 2015 with the intention of establishing its power before the economy collapsed.

The economy has been stabilised now and the Government is currently focusing on development, he said. “It has been possible to deliver a clean administration as we promised to the people,” he noted.

Prime Minister Wickremesinghe said a plan to develop the Wanni Hathpattu area would be formulated and implemented this year. He added that establishing vocational training centres and a drinking water project for the area between Galgamuwa and Yapahuwa would be part of this plan.

“We have already begun development of the northwest. An industrial zone has commenced in Bingiriya. Puttalam is rapidly developing into a tourism hub. It is my belief that those benefits will reach Nikaweratiya as well,” he said.