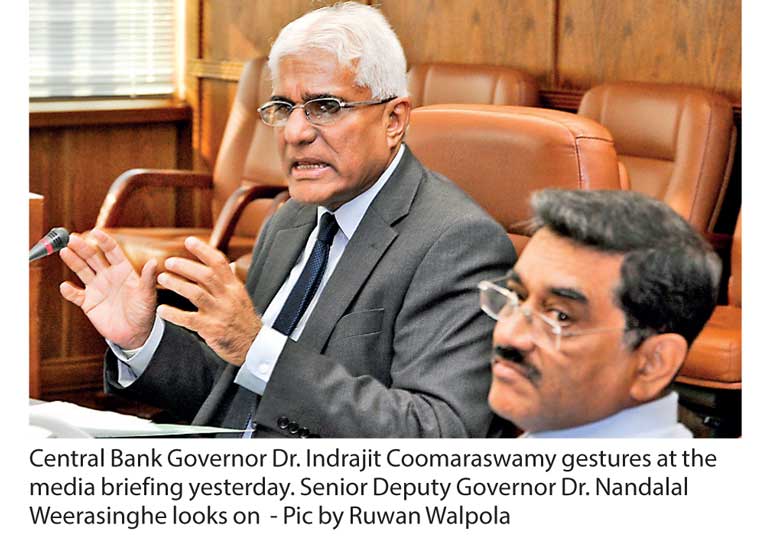 With a view to safeguard the interests of the depositors and ensure stability of the financial system, the Central Bank yesterday appointed a new management panel to oversee beleaguered ETI Finance Ltd. (ETIF) and listed Swarnamahal Financial Services Plc (SFSP).

“I want to reassure the market as well as depositors in ETIF and SFSP that while there is a problem, it is a problem that can be overcome and can be fixed. ETIF at present is illiquid, but it is not insolvent. In fact, it is an asset-rich company and it has not defaulted on any payments as yet. The assets can be used to turn around the company.

The Monetary Board has taken certain regulatory actions which restrict the business operations and powers of the current Board of Directors of the two firms and has appointed an expert panel to overcome the situation,” Central Bank Governor Dr. Indrajit Coomaraswamy told journalists yesterday.

He ruled out any systemic risk on account of ETI and SFS liquidity issues or a temporary takeover but the Central Bank action was to minimise any damage.

Explaining the rationale for taking regulatory action, he said it was to create time and space for these liquidity constraints to be overcome. The Governor expressed confidence that they would be able to revive the company within six months considering its assets and income, but asserted that if there was still a liquidity problem then they may need to extend it.

The Monetary Board has given regulatory directions to both finance companies as well as to the nine subsidiary companies which belong to ETFI.

“The idea is to try and hold in whatever assets and financing in these companies and to stop that from flowing out for a few months, we can very quickly build up the liquidity in the holding company which is ETIF and restore normalcy.”

Pointing out that the directions related to ETIF and SFSP can be divided in two, Dr. Coomaraswamy stated that one set of directions were designed to restrict the business of the company and another set to restrict the powers of the Board.

In terms of curtailing the business of the two firms, he added that the firms should not make any further disbursements of any loan, credit facility or any other type of financial accommodation, except with a prior written approval of the department of NBFI or management panel, with the Monetary Board appointed to oversee the business affairs of the companies.

He said the firm cannot invest any money other than government securities or fixed deposits in licenced commercial banks nor can they distribute profits retendering or reserves, enter into business other than financial services nor have any transactions with their holding companies or subsidiary companies or related party transactions.

It was pointed out that ETIF in particular has inflows of about Rs. 1 billion a month from its investments and loan portfolio. Therefore, the Governor said that while holding on to the resources of the firm they were hopeful of building the liquidity of the company.

The only powers that the current directors will be vested with are to liaise with the depositors on relevant matters.

“We do not want to undermine the nexus between the directors and their depositors. For instance, if they want to have conversions of deposits into shares, they can negotiate with their depositors. They should also take steps for effective recovery of all money due to the company and they can also negotiate with potential investors to restructure the company,” he said.

The Monetary Board has appointed three experienced retired bankers to the management panel.

“The management panel will be headed by a former Central Bank Assistant Governor Sepala Ratnayake, who for a number of years was the Head of the NBFI Department; retired Bank of Ceylon Deputy General Manager P.A. Lionel, who has had a lot of Treasury experience, and Bank of Ceylon Assistant General Manager H.M. Tilakaratne, who has vast experience in the pawning business. We are fortunate that we were able to acquire the services of three very experienced people with a good balance of expertise.”

The Governor said part of the responsibilities of this panel would be to come up with a business plan to revive the companies and to enforce the directions.

“Six officials of the NBFI Department are already on site. There are three in each of the two finance companies and they have been there from last afternoon. They have started to ensure the directions are enforced and to take stock of the financial position of the two companies. They will be in there for a few weeks until the Central Bank can stabilise the situation.”

He stressed that there is a business plan already put forward by the existing directors and they could build on that.

“We look forward to them helping to develop a new business plan,” he added.

Noting that the Central Bank tried to improve the situation through directions but the directions were violated on a regular basis, Dr. Coomaraswamy said it was one of the reasons why it did not turn around.  “In the past there was serious mismanagement of this company. Being an asset-rich company, there is no reason why they got into this situation. With the expertise we mobilise, we think we can turn it around.”

He said the ETFI was on the list of companies the Central Bank was concerned about from 2012.

The depositors may contact the Department of Supervision on Non-Bank Financial Institutions of the Central Bank by calling 011 2477258 or 011 2477229 for further clarification.

Titled ‘Monetary and Financial Sector Policies for 2018 and Beyond’, the document is expected to lay out the path for optimal growth and continuation of fiscal consolidation along with other reforms that have been instituted by the Government.

The Central Bank yesterday confirmed that it had set up a new department from 1 January called the Resolution Enforcement Department (RED) which will now monitor wrongdoings and take legal action against finance companies.

“We are trying to improve and enhance the rigour of our regulation and supervision. At the same time if we find there has been criminality we will prosecute,” Central Bank Governor Dr. Indrajit Coomaraswamy said in Colombo yesterday.

Noting that there were five distressed finance companies, namely CIFL, ETFI, The Finance, City Finance and Standard Finance as well as one primary dealer Entrust, he stressed that in the future RED would take legal action against them.

Outlining that the Central Bank had already taken action against Entrust and CIFL, he said they wanted to be more rigorous in the way they pursue action. The enforcement unit will also look at unauthorised deposits and pyramid schemes.

Dr. Coomaraswamy said that the Central Bank official met with the Attorney General and he had promised to provide the two senior consultants comprising one criminal lawyer and one civil lawyer to put together a small unit where other counsellors were going to support the senior lawyers.

“In addition, we have three CID officers who are now fulltime,” he added.

The Governor pointed out that the non-bank financial sector has too many players for the volume of business available and they are trying to consolidate by gradually increasing the capital requirement.

Revealing that the Central Bank was upgrading its supervision, Dr. Coomaraswamy asserted that they were switching to a risk-based supervision system.

“We have a kind of traffic light system. We are getting some technical assistance from the US Treasury on this, where they have a model which has certain ratios which would trigger action much earlier in the process.”