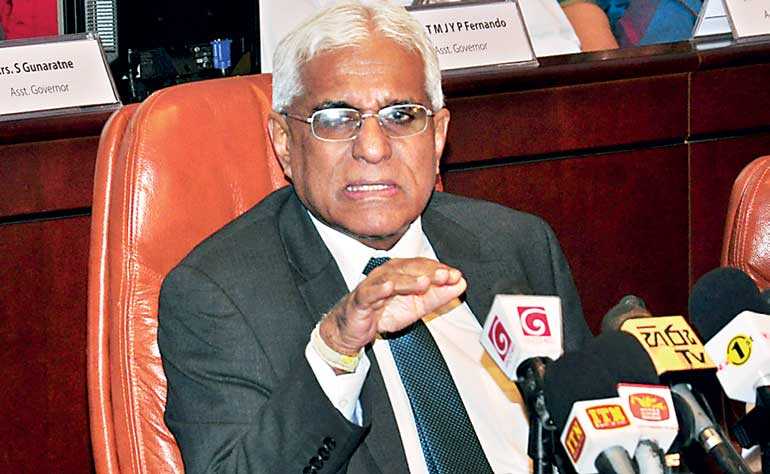 The latest update to the World Economic Outlook (WEO, July 2018) of the International Monetary Fund (IMF) confirmed the strengthening of the global economy in 2018 and 2019 despite less synchronised expansion across economies. The balance of risks is biased to the downside amidst monetary policy tightening in the United States and other major economies, strengthening of the dollar, pressures on currencies of many emerging market economies and escalating trade tensions, the Central Bank said in its Monetary Policy statement.

Central Bank Governor Dr. Indrajit Coomaraswamy also told reporters that growth would likely be around 4% and that the output gap of the economy remained significant.

“This is not a formal estimate that I am giving you, but if one is realistic, it is unlikely that growth will be more than 4% this year. Our potential growth rate, we see as being 5.75%. So, there is a significant output gap,” he said.

Some emerging market economies have responded to these risks by tightening their monetary policies and allowing their exchange rates to adjust appropriately.

“Improved weather conditions are expected to favourably impact agriculture activities and related industries in the second half of 2018 and support the overall growth momentum, which is expected to be led by the expansion in services and industry-related activities. The economy is projected to reach its potential over the medium term, benefiting from a competitive flexible exchange rate, a low inflation environment and a stronger policy framework to support exports and investment, amidst continued fiscal consolidation,” the Monetary Policy statement said.

Inflation is to remain in mid-single digits in spite of the recent uptick year-on-year headline inflation, which remained in low-single digits during the period February-June 2018, accelerated in July as expected. This was mainly due to the recent transitory price pressures stemming from upward adjustments to domestic petroleum prices and higher volatile food prices, as well as the base effect.

Although inflation is projected to remain at the higher end of the inflation target of 4– 6% in August as well, the onset of the harvest towards the end of the third quarter of 2018 is expected to lower inflation thereafter. Stable underlying inflation, together with firmly anchored inflation expectations, indicate well-contained aggregate demand pressures, and supports the projection of mid-single digit inflation in the medium term.

The growth of credit extended to the private sector by commercial banks continued its gradual decline towards the desired levels. Along with the deceleration in private sector credit growth and a reduction in credit extended to the Government by the banking sector on a net basis, the overall monetary expansion also decelerated in June. These trends in monetary and credit expansion indicate greater monetary stability, consistent with the envisaged medium term growth path of the economy.

“The growth of export earnings outpaced the growth of import expenditure in May, thereby containing the trade gap to some extent. Supporting the current account, earnings from tourism and workers’ remittances continued to increase so far during the year. The recently introduced measures to address the excessive growth of import of gold and motor vehicles are expected to reduce the pressure on the balance of payments stemming from trade account dynamics.”

Meanwhile, as observed in other emerging market economies, some outflows of foreign investment from the rupee denominated government securities market were experienced recently. Despite an outflow from the secondary market, the Colombo Stock Exchange (CSE) attracted net inflows as a result of primary market transactions. Although some pressure on the exchange rate was observed since late April, mainly reflecting the impact of the dollar’s broad-based strengthening in global markets, the depreciation pressure has eased to some extent from late July. Reflecting these developments, the exchange rate has depreciated against the dollar by 4.2% so far during the year.

The Central Bank has absorbed $ 133.9 million, on a net basis, from the domestic market by end July. The gross official reserve position was estimated at $ 8.4 billion at end July compared to $ 8 billion recorded at end 2017.

AFP: The Central Bank yesterday announced it had secured a $ 1 billion Chinese loan as the island, a key link in Beijing’s ambitious Belt and Road Initiative, develops closer relations with Asia’s largest economy.

Central Bank Governor Indrajit Coomaraswamy said that first half of the loan will be released later this month and the balance will be received in October.

“During consultations (with the Chinese over the loan) it was clear that they see us as a key strategic partner as far as the (Belt and Road) Initiative is concerned, given our location,” Coomaraswamy told reporters in Colombo.

The eight-year loan by China Development Bank carries a 5.25% interest rate with a three-year grace period.

Coomaraswamy said that the terms of Chinese loan were better than other international lenders and the country hopes to secure additional $ 200 to $ 250 million from China’s domestic financial market by issuing ‘Panda bonds’.

Sri Lanka last year granted a 99-year lease on a strategic port to Beijing over its inability to repay Chinese loans for the $ 1.4 billion project.

The Port in Colombo straddles the world’s busiest east-west shipping route and also gives a strategic foothold to China in a region long dominated by India.

China had said its loan portfolio in Sri Lanka was $ 5.5 billion as of last month, just over a tenth of Colombo’s total $ 51.82 billion external debt.

“China will continue to provide selfless support, including much-needed funds for the development of Sri Lanka,” the Chinese Embassy in Colombo said last month.

China’s Belt and Road infrastructure project seeks to revive ancient trade routes through a massive rail and maritime network via $ 1 trillion in investments across Asia and Europe.

The International Monetary Fund, which bailed out Sri Lanka in June 2016 with a $ 1.5 billion staggered loan, has warned Colombo over its heavy debt.

The Central Bank had forecast 2018 growth at between 4.0 to 4.5%, but Coomaraswamy yesterday revised his estimate for the calendar year to below 4.0%.