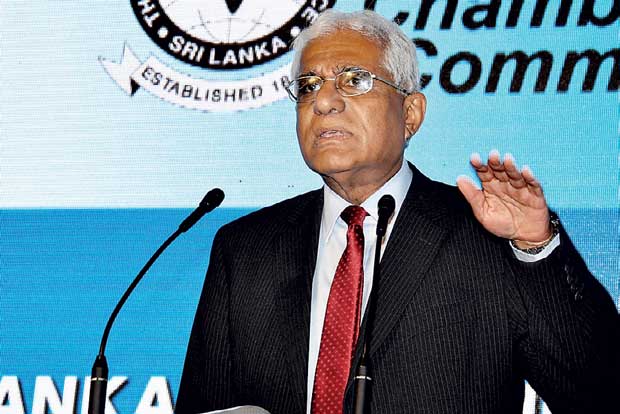 Speaking to a fully-packed audience at the latest Sri Lanka Economic Summit edition of the Ceylon Chamber of Commerce, CBSL Governor Dr. Indrajit Coomaraswamy urged the private sector to look through the prevailing negativities, at the bigger picture and keep its investments within the country.
Stressing the need for change in focus with regard to the growth model, he pointed out Sri Lanka has “no choice” but to be led by the private sector as the earlier frameworks utilized over the years will “not work anymore.”

“In the next 12 months it is the domestic private sector that has the strength to move the economy forward. I ask all of you to not look at negativities around. Instead ask yourselves if the macroeconomic fundamentals are in place.

“If we are going in the right direction I would rather ask you to put your money here rather than in Bangladesh, Fiji, or Ethiopia,” he said.

Given the instability inconsistency that has been witnessed across all levels in the operational environment in the recent years, local and foreign investors were observed to have taken a ‘wait-and-see’ approach in making their investments.

Foreign direct investment to Sri Lanka hit a dismal low of less than US $ 500 million last year.
The Governor said that prior to making decisions with regard to expansions and new initiatives, it is imperative that the private sector ask itself questions such as: ‘If the macroeconomic policies being established in a stable manner?’: ‘Is the investment climate improving?’: And if the cross border transaction in terms of trading coming down?’.

While admitting that Sri Lanka’s political system is one that is “noisy and untidy”, he stated that it is this “dysfunctional system that has given us freedom”. “We need to see through that and see where the system is going.

The time is right,” asserted Dr. Coomaraswamy. He went on to say that the private sector has substantial influence in the way economies are developed and shaped.  While these influences span across issues such as the type of goods and services the economy produced, he stressed it has been established that faster growing economies are associated with higher private sector investments.

According to the World Bank data, the private sector has provided 90 percent of the jobs in developed countries, has invested funds over 60 percent in European countries, and in some countries even has contributed 80 percent of government’s revenue. “Given the global developments, our private sector needs play a much bigger role in all these areas,” he said.