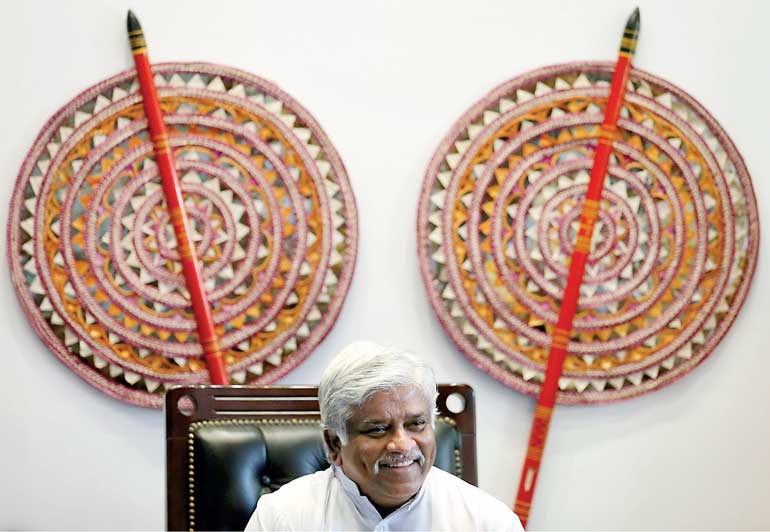 Petroleum Resources Development Minister Arjuna Ranatunga’s remarks last week that he is opposed to a hike in fuel prices despite the Ceylon Petroleum Corporation losing money by not making revisions has caused serious concern over good governance and public enterprise reforms.

According to Lanka IOC, which mooted the idea of a hike in October, at the currently prevailing international prices the company and CPC are losing Rs. 17 per litre on the sale of petrol and Rs. 14 per litre on the sale of diesel. Though global prices have increased, fuel prices have not been revised upwards since the substantial reduction (ranging from 14-22%) made by the Unity Government in January 2015.

LIOC’s plans come hot on the heels of the price of a domestic LPG cylinder increasing by Rs. 110 due to the increase in gas prices in the international market.

However, Minister Ranatunga is opposing a hike on the part of CPC saying the timing isn’t right and will impose a heavy burden on the people and trigger a chain reaction across the cost of other goods and services.

“If Lanka IOC increased the prices of fuel, considering the burden on the people, the CPC would supply oil at the existing price even if the corporation incurs losses,” was the response from the Minister, who is widely known as Captain Cool for his cricketing heroics. He also distanced himself from responsibility if the Government eventually decides to hike CPC prices.

The LIOC Managing Director said that although losses were very high, the company would increase the prices to the bare minimum so as to prevent the company going into losses on an overall basis. In June ’16/August ’16, taxes have been increased on diesel and due to this the positive margins to oil companies on diesel also got eroded.

However, Ranatunga said fuel prices cannot be revised by LIOC whenever they wished but CPC has a national responsibility. He also said an entity like CPC should not be concerned about making a profit but offer relief even at a loss if necessary. However, he said the broader objective was not to make a loss whilst giving relief to people.

Analysts said that the emphasis “even if the CPC incurs losses” was a big concern and contrary to the advice given by the Central Bank as well as IMF that the state oil giant must cut its losses and improve financial viability.

Though favourable global prices helped both CPC and LIOC to make a profit in the first nine months of last year, fortunes have worsened since then. As opposed to a pre-tax profit of Rs. 69.6 billion in 2016 in comparison to a loss of Rs. 19.9 billion in 2015, CPC in the first four months of this year has suffered an operational loss of Rs. 3.8 billion according to published Treasury documents. The year-to-date loss is estimated to be much higher. The increased cost of imports and depreciation of the rupee were among the reasons.

The overall exchange loss at CPC was Rs. 5.7 billion during the first four months of 2017.

The Government has also issued Treasury guarantees worth $ 1.6 billion as collateral to the Bank of Ceylon and People’s Bank against the borrowings of CPC.

The Central Bank in its 2016 Annual Report was emphatic that ensuring the financial viability of the CPC was crucial since financial losses made by the CPC adversely affect the government budget, while higher borrowings by the CPC led to balance sheet deterioration of the state banks. “Since the CPC is a SOBE (state-owned business enterprise), financial losses of the CPC ultimately will have to be borne by the taxpayers of the country.”

The Central Bank in April warned that the rising trend in oil prices owing to production cuts by leading oil producers and the depreciation of the exchange rate are likely to increase the cost of oil imports to the CPC. “Therefore, current market trends indicate a potential weakening of the financial position of the CPC in the near future,” it added.

Ranatunga in his statement did acknowledge that the sale of diesel and kerosene was at a loss for the CPC.

For over two years there have been calls for a reintroduction of automatic pricing. The Minister too agrees but first wants a proper committee instituted and the adoption of independent formulae.

The Central Bank has said accelerating the process of introducing a market-based pricing mechanism for petroleum products and strengthening the debt collection mechanism of the CPC are important measures to be taken to ensure the financial viability of the CPC.

“These measures will ensure a healthy cash-flow position and reduce the dependency of CPC on the borrowings from state banks,” it added.

The Government in June promised the IMF that it would obtain Cabinet approval on the automatic pricing mechanism for fuel by March 2018.

According to the Central Bank, the demand for petroleum products from the energy generation and transportation sectors increased substantially during the year, mainly due to the increased demand for transport service as well as the higher thermal-based power generation caused by erratic weather patterns during the latter part of 2016. Petroleum sales to the energy generation in Sri Lanka grew by 103.9% in 2016 in comparison to the previous year. Petroleum sales to the transportation and aviation sectors in 2016 grew by 8.7% and 11.3%, respectively. Domestic sales of diesel increased by 19.9% in 2016 in comparison to the previous year.

Ranatunga in his statement also said CPC was overstaffed especially when a modern refinery could be operated with 250-350 people whereas CPC has 1,500.