You are here: Home / Business Now / 50% of Port City completed 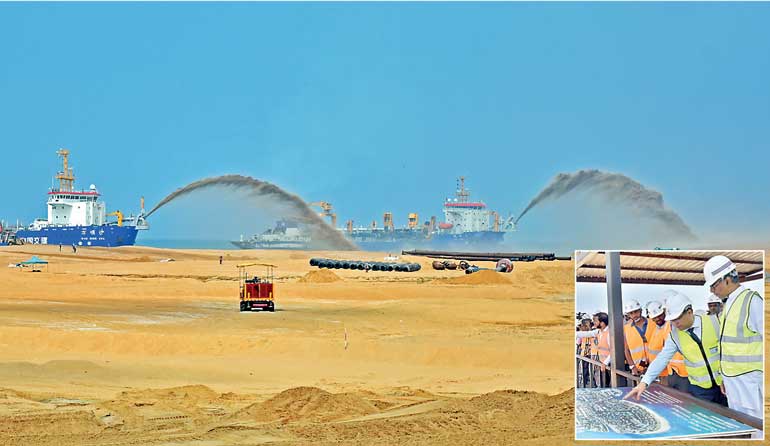 The $ 1.4 billion Port City is halfway to being completed, the Government said yesterday, as preparations get underway to ready the reclaimed land for construction and for it to be auctioned off to potential investors in the first quarter of 2018.

Megapolis and Western Development Minister Champika Ranawaka told reporters that as the President was constitutionally empowered to be the final owner of all land, he would declare the Port City as part of Sri Lanka once reclamation work was completed.

The 269 hectare reclamation will be completed in mid-June 2019. It is at this point that the declaration by President Maithripala Sirisena is expected. Out of the 269 hectares, 116 hectares will be handed over to China Communications Construction Company (CCCC), which is the parent company of China Harbour Engineering Company (CHEC).

“As the Port City is considered to be a new territory of Sri Lanka, it will be declared as part of the country by the President and only then will it be handed over to the Megapolis Ministry and the Urban Development Authority (UDA). Any calls for EOIs or other documents will only take place after that,” the Minister said, denying that any tenders had been called yet.

Port City officials said that the Chinese company was in the midst of constructing a temporary building that would be their base of operations when eventually auctioning the land. Ranawaka noted that as the Port City was envisioned as a long-term project, segments of the land had been divided into zones and would be parcelled off, with sales expected to extend to 2045.

“We don’t know how much we will get for the land. That all depends on the market at the time of sale,” he said. Megapolis officials and their Port City counterparts are also preparing to meet the infrastructure needs of the Port City, with approval already given for a garbage management system.

He also said laws to be formulated by year-end would “facilitate administrative entity and ease taxation for investors” in the Colombo Financial City Project that encompasses Port City. The Government has already appointed a committee to study the legal implications and how to implement British law in the Port City but still keep it within the sovereignty of Sri Lanka.

He said legislation was needed as the area involved reclaimed land that the Government wanted developed as an international financial city, targeting global companies.

“We will relax taxation for those who are parking money here. We should have our own competitive advantage,” the Minister said.

Under the previous agreement the Government would have been responsible for providing infrastructure such as water, power and sewage management but under the new arrangement a Joint Venture will be formed between the Government and the company to provide these services. Accordingly, plans have been drawn to establish two tanks for water supply and the ministry is planning to establish an LNG plant to meet the power needs of the Port City.

The Government is also readying for massive infrastructure development linked to the Port City with elevated highways planned from the Katunayake Expressway to the reclaimed area. A second access point will be provided by an underground connection that will link travellers with the light rail system, which will have a station in Colpetty. The light rail system is to kick off next year with funding from Japan International Cooperation Agency (JICA), officials said.

Port City Project Manager Nihal Ferando also said that under the previous agreement if traffic congestion in the capital impacted the Port City the Government would have had to pay compensation but under the new version if the Government accomplished this set of objectives, including the elevated highway and other access points, no payments would have to be made to the Chinese company.

The Minister also rejected concerns over requirements for sand, insisting that only part of the borrowing pit of the Sri Lanka Land Reclamation and Development Corporation would be used and the Chinese company would pay about $ 2 million for it. As much as 40% of the sand for the project was sourced from a different borrowing pit specially allocated for the Port City.

Responding to questions on the Port City’s impact on fishing communities, Ranawaka stated that Rs. 148 million had been spent by the company to address their concerns and officials would continue to engage with representatives.

Port City officials rejected claims that the dredgers had been working too close to shore, saying that they had launched an app to track the dredgers, which was available to the public, and its details had been erroneously communicated.

“The app showed the dredger was 3.9 nautical miles from the shore and they had assumed this was kilometres but in reality a nautical mile is 1.82 kilometres, which means that these dredgers were well within regulated distance,” Fernando said.