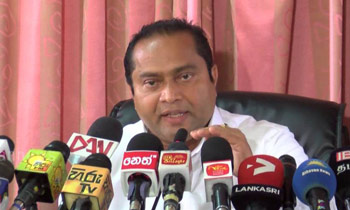 The Western Provincial Council (WPC) is to introduce a work-from-home-system or teleworking as a measure to ease traffic congestion and fuel emission in the Colombo City, WPC Chief Minister Isuru Deshapriya said.

A discussion with government institutions on this concept which is to be introduced in collaboration with the Western Province Waste Management Authority (WMA) was held under the CM’s guidance at his office.

The CM said traffic in Colombo was an environmental and an economic hazard and teleworking could mitigate this situation by at least 20 per cent.”

Teleworking allows employees to work from home or at a teleworking centre on one or more days of the week, using communication tools such as phones, fax, internet or e-mail.

“Although various methods were adopted to reduce the traffic in Colombo and the suburbs at peak hours. Toll gates and lane discipline were introduced but none of these methods were successful in reducing traffic congestion,” said Dr. Priyantha Wijesooriya, a member of the WMA board of directors.

He said some 225,000 vehicles enter the city daily and the best strategy of managing traffic is to stop the vehicles originating at the source. “A demo-project will be launched with registered institutions to monitor and analyze the success of the teleworking system,” he said and added that an apex body would be set up to function as a programme secretariat to regulate the entire process. (Thilanka Kanakarathna)