You are here: Home / Breaking News / Will Wimal survive this time? – Daily Mirror 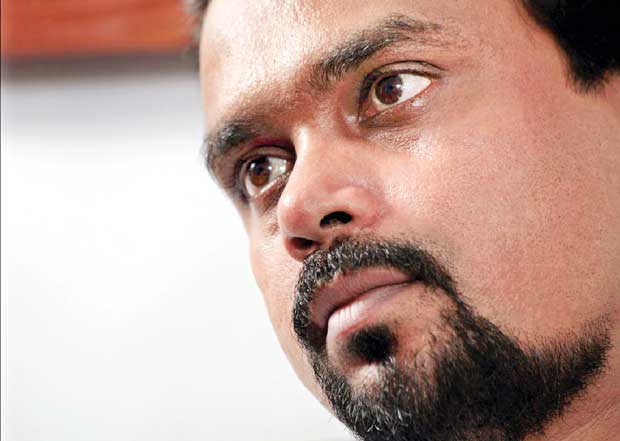 A courageous campaigner and strategist, but can he meet present challenges and rise again

Yet, it is too early to predict the fate of the NFF or that of its leader

He might be pushed to exploit more and more nationalistic sentiments of the people, for the survival

Even being a strong loyalist of the former President Mahinda Rajapaksa, National Freedom Front (NFF) leader Wimal Weerawansa has unusually taken a backseat at a time when his boss and mentor is going to face an election, the results of which might turn out to be a trendsetter.

The reason is very clear. His party is facing a crisis situation as three key leaders of his party have defected to the Sri Lanka Freedom Party (SLFP) led by President Maithripala Sirisena and another one seems to follow suit.

Deputy leader of the NFF Weerakumara Dissanayake, National Organiser Piyasiri Wijenayake and Eastern Province leader and former Parliamentarian Jayantha Wijesekara have already obtained the membership of the SLFP from President Sirisena last week, while PriyanjithVitharana has resigned as NFF General Secretary as well as a member of the party.

He is no longer a communist revolutionary as he was ten years ago. Nor does he seem any longer to have any serious political goal such as socialism

Although Vitharana cited health reasons for his resignation from the party and the post of General Secretary, he had attributed his decision to political reasons, while speaking to media over the weekend.

He has not revealed what his future political course of action would be, but he too might follow the other defectors, given the line of thinking of the four.

All four top leaders of the NFF had attempted to justify their decision to leave their party during their press briefings and interviews with the weekend newspapers.

Except for Vitharana other three leaders argued that they joined the SLFP to prevent the United National Party (UNP) from coming to office in 2020. However, their arguments do not seem logical or strong.

Weerakumara Dissanayake says that his leader Weerawansa wanted to divide the SLFP and that would pave the way for UNP leader Ranil Wickremesinghe, to emerge as the President of the country in 2020.

The reason is clear; his party is facing a crisis situation as three key leaders of his party have defected to SLFP led by President Maithripala Sirisena and another one seems to follow suit

Having said that, he teamed up with President Sirisena who had already divided the SLFP in 2014 with his defection and appointed Ranil Wickremesinghe Prime Minister when the latter was commanding the confidence of only about 50 members of the Parliament.

Wijenayake observes that they have a duty to achieve national freedom and it is possible only by teaming up with the President, the leader who has the people’s mandate to rule the country.
He also contends that nobody could defeat the UNP by disregarding the President.

It is not clear as to what he meant by national freedom and how he is going to defeat the UNP with a leader who was elected to power mainly by the UNP voters and running a government with the same UNP.

Jayantha Wijesekara states that one of the objectives of the NFF was to bring in Socialism through a national freedom struggle and the President at a recent discussion with the NFF had pledged that he would not allow anybody to divide the country or to sell the national assets.

It was his NFF that initiated the Rise with Mahinda campaign after the defeat of Mahinda Rajapaksa. These were, no doubt milestones in the Sri Lankan political history

He contends that the party should take that assurance seriously and work accordingly. He accuses that party leader Weerawansa had demanded his resignation from the party as he suggested to contest the upcoming election on their own if the party was not given its due share of seats by the Sri Lanka Podujana Peramuna (SLPP).

He also complains that he wanted to talk to former President Mahinda Rajapaksa about election arrangements, but was not given an opportunity which prompted him to talk to the President.
It is clear that Wijesekara has not resigned from the NFF on his own. He has been disposed of both by Weerawansa and Rajapaksa.

This was what Weerawansa also did in 2008 as a leader of the Janatha Vimukthi Peramuna (JVP) when he was sidelined by the other leaders of that party, suspecting his activities.
When he sensed that something was happening within the party against him he tried hard, during a speech in Parliament to elucidate as to how much he was loyal to the party policies. Explaining how much he sacrificed to the party, he said he could not even visit the historic Sigiriya rock fortress in his life, due to his dedication to the party activities and questioned “Mage pakshaya mata wedi thibbe ey? (Why did my party shoot me?) But, after he left the party he did not want to pursue the same policies of the party which in fact he had been so much dedicated to.

Weerawansa wrote a book titled Neththa Wenuwata Eththa (Truth in place of falsehood) in 2008 in which he, quoting Soviet leader V.I. Lenin and JVP founder leader Rohana Wijeweera argued that the JVP should have joined the Government led by President Mahinda Rajapaksa, in the wake of the 2005 Presidential Election, at which the JVP supported Rajapaksa.

It could have helped the party, he contended, in mustering more public support and suggested to leave the government when it goes against the wishes of the people. He cited his plan as a strategy in the proletariat struggle to achieve socialism.

However, he did not walk the talk. Instead of leaving the Government, he was in the forefront in supporting Rajapaksa during the passage of the 18th Amendment to the Constitution that abolished the Independent Commissions, the institution of which his party, the JVP was instrumental to. He supported the incarceration and deprivation of pension and medals of Army Commander Sarath Fonseka and was a part of the process of impeachment of Chief Justice Shirani Bandaranayake He, during the implementation of the “strategy in his proletariat struggle” wholeheartedly defended the Rajapaksa government when it brutally suppressed the agitations by the workers, fishermen and the people in Rathupaswala, killing the demonstrators.

He also defended the government when it was accused of mass scale corruption. Now he also has been accused in the courts of illegally amassing wealth.

Yet, it is too early to predict the fate of the NFF or that of its leader, as Weerawansa is a courageous campaigner, strategist and a talented organiser who had withstood many odds in his political life.
He was a key figure in a small JVP team that changed the Sri Lankan political history many a time. Wimal was known to the people as one of the two key men who strove hard to make the JVP to rise from the ashes, after its entire leadership was decimated by the armed forces during its 1988/89 insurgency. The other person was JVP General Secretary Tilvin Silva.

When the JVP meticulously used an opportunity to press a beleaguered President Chandrika Kumaratunga in 2001 to institute Independent Commissions through the 17thAmendment to the Constitution after forming the Parivasa Anduwa (Probationary Government), Weerawansa was in the forefront in the process. This was the only major democratic change in the second Republican
Constitution then.

He played a key role in 2004 as a JVP leader, in dissolving the Ranil Wickremesinghe Government, which had by then gone too far in giving in to the LTTE, during the peace process.

It was his NFF that initiated the Rise with Mahinda campaign after the defeat of Mahinda Rajapaksa. These were, no doubt milestones in the Sri Lankan political history.

However, it is not clear whether Weerawansa has a capable supporting team to meet the present challenges and rise again this time.

He is no longer a communist revolutionary as he was ten years ago. Nor does he seem any longer to have any serious political goal such as socialism. Therefore, he might be pushed to exploit more and more nationalistic sentiments of the people, for the survival.