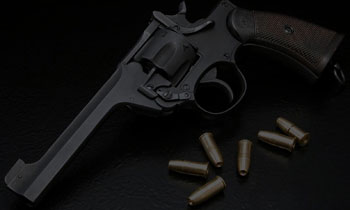 The investigations into the detection of weapons at the Mount Lavinia Courts had revealed that the pistol and revolver had been smuggled into the premises by an underworld gangster known as Vidanagamage Rangana allias Maiya to kill underworld gangster ‘Gona Kovile Roha’.

Police arrested ‘Maiya’ in Wellawatta a couple of days after the detection of the weapons.

They said he was connected to the main drug smuggling network. The gangster was detained for questioning and would be produced in the Mt. Lavinia Magistrate’s Court soon.

Investigations had also revealed that ‘Maiya’ had been sent to the courts complex by underworld gangster Don Shalu Roshan Indika de Silva alias Rosha, who was remanded after he surrendered to the Police on Friday .
Twenty suspects arrested in connection with the incident and were also remanded till March 13. Police said 16 of the 20 suspects were residents of Ratmalana. (Darshana Sanjeewa)