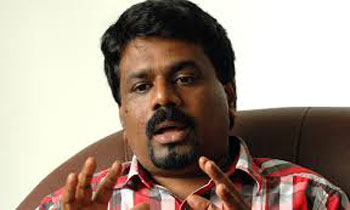 Chief Opposition Whip Anura Kumara Dissanayake today asked in Parliament whether the removal of delimitation committee chairman Asoka Peiris from his post as Chairman of Lanka Mineral Sands (LMS) was an act of political victimization.

He said Mr Peiris found out about his removal LMS Chairman only after he returned after testifying about the company before the committee on public enterprises.

Industries and Trade Minister Rishad Bathiudeen in his response said he would look into the removal of Mr Peiris. The minister also confirmed that Mr Peiris has been an efficient public servant and assured that Lanka Mineral Sands would not be privatized. (Yohan Perera)