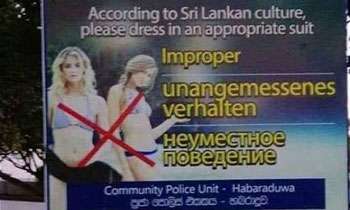 The sign boards which were displayed in the premises of the Koggala Martin Wickremesinghe Museum and Children Park by the Community Police Unit in Habaraduwa restricting tourists with swim-wear, were removed by the police following objections by the people on social media, police said.

The Sri Lanka Tourism Development Authority (SLTDA) yesterday said the Authority was concerned about the displayed notice by the Community Police Unit in Habaraduwa.

The public notice shows a picture of two women in two-piece bikinis with a message urging visitors to dress appropriately and respect the Sri Lankan culture.

While posting a message on Twitter, the SLTDA expressed its concern.

The notice said the ‘Dress code policing’ was not needed and unwarranted for tourists enjoying the scenic beaches of Sri Lanka. The SLTDA has taken this up with all relevant authorities. “We expect to see progress soon,” the post said.

Meanwhile, the Habaraduwa Police said the sign boards were erected after a decision taken by the Habaraduwa Community Police Unit to protect the culture of the country.

After receiving several objections from social media, the boards were removed. (Chaturanga Samarawickrama)