Oct 21, Colombo: National Coordinator of Sinha Le group, Ven. Arambepola Rathanasara Thera was remanded until the 30th of this month when he was produced before the Mount Lavinia Magistrate’s Court last night.

The Rathanasara Thera who was arrested for behaving in an unruly manner during an attack on a group of Rohingya refugees who were under the care of the UNHCR at a safe house of the agency in Mount Lavinia last month.

He was arrested yesterday while he was traveling to Colombo in a bus from Kandy.

The Rathanasara Thero is scheduled to be produced before an identification parade on the 30th, Police Media Spokesman, SSP Ruwan Gunasekara stated at a media briefing in Colombo. He said the Thero was absconding the police. 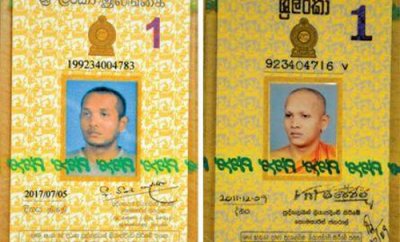 SSP Ruwan Gunasekara said a special team from police headquarters arrested the Thera at a checkpoint in Nittambuwa town. At the time of his arrest, the Thera was in the possession of two national ID cards – Bhikku and a layman IDs. The Bhikku identification card in his possession has been issued on the 29th December 2011 while the layman identification was released recently 5th July 2017. The name in the layman ID has been listed as Tennakoon Mudiyanselage Chamara Dharmasiri Tennakoon

It has become clear that these IDs have been used for illegal unruly activities, the police spokesman said. He said the police are inquiring into the monk’s activities using these ID s in the past three months.