You are here: Home / Breaking News / Vehicular movements will be restricted today due to VVIP movements – Daily Mirror 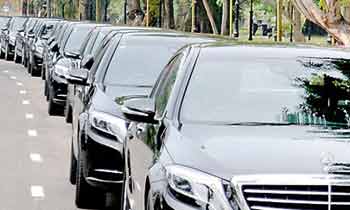 Vehicle movement will be restricted in several roads between Bandaranaike International Airport (BIA) and Colombo today due to the departure of Singaporean Prime Minister from Sri Lanka and the arrival of Indonesian President today, police said.

The restrictions will be imposed for certain times between 11.30a.m and 2.00 p.m today.

Accordingly, due to departure of Singaporean Prime Minister Lee Hsien Loong , vehicular traffic will be restricted on following roads leading to BIA.

Due to arrival of Indonesian President, vehicular movements on the following roads will be restricted from BIA to Colombo for a certain time between 11.30a.m and 1.00p.m. today.