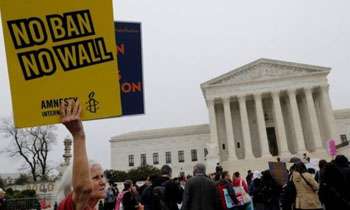 Lower courts had deemed the ban unconstitutional, but the Supreme Court has reversed this decision in a 5-4 ruling which announced on Tuesday.

The ban prohibits most people from Iran, Libya, Somalia, Syria and Yemen from entering the US.

The court’s reversal is viewed as a victory for the Trump administration. But the travel ban has been widely criticised by refugee and human rights groups.

Chief Justice John Roberts wrote the opinion, which said the travel ban was “squarely within the scope of Presidential authority”.

“The Government has set forth a sufficient national security justification to survive rational basis review. We express no view on the soundness of the policy.”

Shortly after the Supreme Court released its decision, President Donald Trump shared the news from his Twitter account.

Omar Jadwat, director of the American Civil Liberties Union (ACLU) Immigrant Rights Project said in a statement that the ruling was one of the Court’s “great failures”.

“The court failed today, and so the public is needed more than ever. We must make it crystal clear to our elected representatives: If you are not taking action to rescind and dismantle Trump’s Muslim ban, you are not upholding this country’s most basic principles of freedom and equality.”