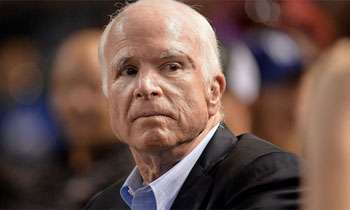 Mr McCain died on Saturday surrounded by his family, according to a short statement released by his office.

He was diagnosed with an aggressive brain tumour in July 2017 and had been undergoing medical treatment.

His family announced Mr McCain, who left Washington in December, had decided to stop treatment on Friday.

Mr McCain’s daughter Meghan said the task of her lifetime would now be “to live up to his example, his expectations, and his love”.

“The days and years to come will not be the same without my dad – but they will be good days, filled with life and love, because of the example he lived for us,” she wrote in a statement shared on Twitter.

The six-term senator and 2008 Republican presidential nominee was diagnosed after doctors discovered his tumour during surgery to remove a blood clot from above his left eye last July.

The son and grandson of Navy admirals, Mr McCain was a fighter pilot during the Vietnam War. When his plane was shot down, he spent more than five years as a prisoner of war.

While in the custody of his captors, he suffered torture that left him with lasting disabilities.(BBC)