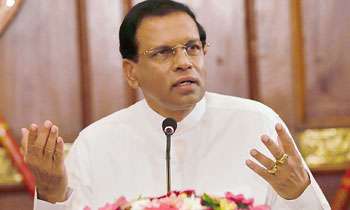 The Paddy Marketing Board (PMB) established in 1971 to save the paddy farmer from ‘Mudalalies’ was later neglected by the UNP and the Peoples Alliance governments and the real culprits to create, promote the rice mafia were those who attempted to wind up the PMB, President Maithripala Sirisena said today.

He said the UNP regime closed down the PMB in 1993 and Peoples Alliance government led by President Chandrika Kumatratunga attempted to abolish the PMB Act in 2000.

The President said this at the inauguration ceremony held to mark the renovation of 2,400 rural tanks connected with “Ellanga Gammana” or Cascaded Tank-Village system in the Dry Zone (Wayamba) and the commencement of the Second Stage of the Wayamba Ela, Kubukulawa Tank at Polpithigama in Kurunegala District.

He said together with 17 other ministers in the PA government they defeated the proposal to abolish the PMB Act in 2000.

“In 2006, as the Minister of Agriculture, I tried had to revive the PMB but there was leg pulling and acts of sabotage to my effort. Therefore, I can confidentially claim that the weakening of the PMB and raising a rice mafia was their scheme,” the President said. “I have been associated with rivers, tanks, streams, paddy fields, ploughing and any other task related to agriculture and irrigation since my childhood. I am well aware of the difficulties and sufferings faced by farmers in Sathkorale. In 1994, as the Minister of Agriculture I launched a project to renovate and develop the entire tank network as almost all the small, medium and large tanks in Kurunegala and Puttalam had been dried to the bottom. The project launched today is aimed at nourishing the field of agriculture utilizing this agrarian system. Under this programme around 300 tanks will be renovated in the Kurunegala District. The Stage II of the Wayamba Ela Project where waters from the Mahaweli will be diverted from the Eastern Province to the Northern Province via Wayamba will cost Rs. 23,000 billion. In the time of kings, the Wayamba or Sathkorale was known as ‘Bath-Korale’ as farmers in Sathkorale supplied rice to the entire country. In Sathkorale, you have more tanks and a bigger irrigation network than Rajarata Therefore; you have a historically significance and prestigious background and there are 10,000 tanks at your disposal.” (Sandun A Jayasekera)