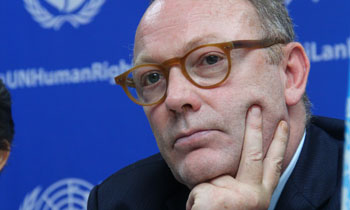 While calling for the replacement of the Prevention of Terrorism Act (PTA), UN Special Rapporteur Ben Emmerson yesterday asked the government not to allow the process of accountability to be diverted by retrograde elements in security establishments and their allies in Government.

Mr. Emmerson, the Special Rapporteur on the promotion and protection of human rights and fundamental freedoms while countering terrorism, arrived in Sri Lanka on Sunday on an invitation by the government.

He told a news briefing held at the UN compound in Colombo, that the purpose of his visit was to assess the progress Sri Lanka had made in its law, policies and practice in the fight against terrorism as measured against international human rights law.

Referring to the findings of his mission, Mr. Emmerson said practices of torture were very deeply ingrained in the security sector and all of the evidence points to the conclusion that the use of torture has been, and today remains endemic and routine, for those arrested and detained on national security grounds.

“Torture in Sri Lanka is one of the worst in the world that I have witnessed. During my interviews with current and former PTA detainees, I heard distressing stories of extremely brutal methods of torture, including beatings with sticks, the use of stress positions, asphyxiation using plastic bags drenched in kerosene, the pulling out of fingernails, the insertion of needles beneath the fingernails, the use of various forms of water torture, the suspension of individuals for several hours by their thumbs, and the mutilation of genitals. In a number of instances, these allegations had either been supported by independent medical evidence, or accepted by the judiciary as the basis for excluding a confession at trial,” he said and added that since the authorities use the PTA disproportionately against members of the Tamil community, it was this community that has borne the brunt of the State’s ‘well-oiled torture apparatus’.

Mr. Emmerson said he was extremely concerned to learn that 80 per cent of those most recently arrested under the PTA in late 2016 complained of torture and physical ill-treatment following their arrest, in cases which were later dealt with under ordinary criminal law.

Through a combination of extended executive detention and grossly protracted criminal proceedings, he said suspects arrested under the PTA have commonly been held in detention, in conditions that amount to inhuman and degrading treatment, for many years without ever having been found guilty of anything and without any effective judicial review of their detention.

“This entire PTA system, as it has operated until now, and continues to operate in those current cases to which it applies, amounts to a flagrant denial of justice,” Mr. Emmerson said.

He reminded that the Sri Lankan Government had committed to repeal the PTA and to replace it with anti-terrorism legislation in accordance with contemporary international best practices through Human Rights Council resolution 30/1 adopted in 2015.

However, many of those who spoke to the Special Rapporteur had expressed dismay at the lack of ministerial, parliamentary or public consultation over the proposals.

“Even the Human Rights Commission has not been informed or consulted on the draft framework. Nonetheless, the present draft makes some significant improvements. However, there are a number of central flaws in the current framework draft which, if enacted, would guarantee the continued violation of the human rights of terrorism suspects,” he said.

Mr. Emmerson said the progress of this legislation to date has been painfully slow, and this has, in turn, delayed the wider package of transitional justice measures that Sri Lanka committed to deliver two years ago. “It is difficult to resist the conclusion that this inertia reflects the continuing influence of certain vested interests in the security sector, who are resistant to change, and above all, to accountability,” he said.

Referring to the UNHRC resolution which was co-sponsored by Sri Lanka and the commitments made by the country through this resolution, Mr. Emmerson said, “Two years on, and already four months into a two-year extension granted to the Government by the Human Rights Council, progress in achieving the key goals set out in the Resolution is not only slow, but seems to have ground to a virtual halt. None of the measures so far adopted to fulfil Sri Lanka’s transitional justice commitments are adequate to ensure real progress, and there is little evidence that perpetrators of war crimes committed by members of the Sri Lankan armed forces are being brought to justice,”

Responding to journalists he said it was highly questionable and uncertain whether Sri Lanka could deliver on its promises within the two-year extension and said there could be repercussions, if it failed to deliver promises. “There comes a point where patience runs out,” Mr. Emmerson said. (Lahiru Pothmulla)