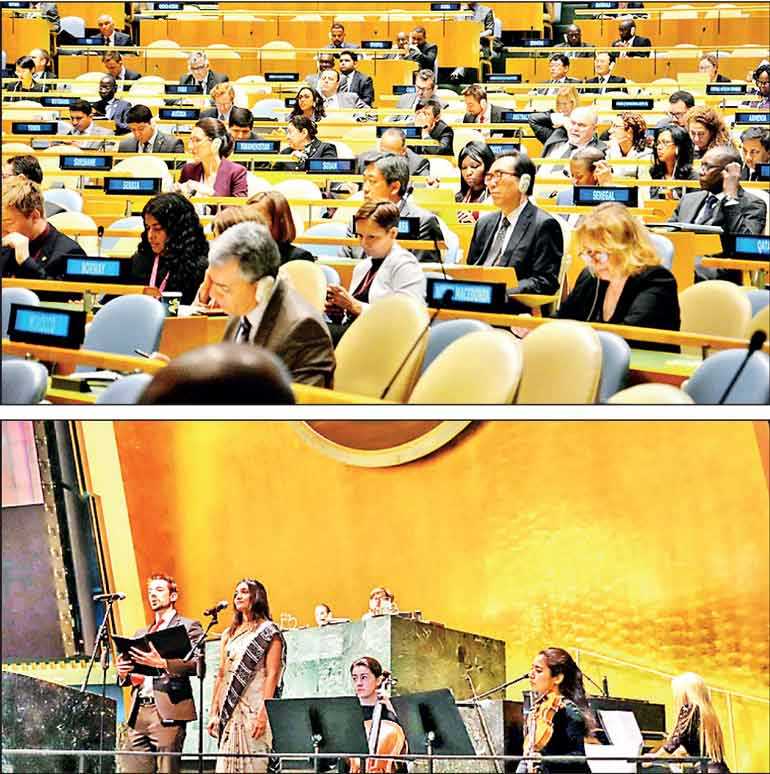 A commemorative event for the victims of the Easter Sunday terror attacks in Sri Lanka was held on Friday 3 May at the General Assembly Hall of the United Nations Headquarters in New York.

The event, to honour the victims, their families and all those affected by the Easter Sunday attacks on 21 April, was co-organised by the Office of the President of the General Assembly (PGA) and the Permanent Mission of Sri Lanka to the United Nations. The meeting was chaired by the President of the General Assembly with United Nations Deputy Secretary-General Amina Mohammed in attendance.

President of the 73rd Session of the General Assembly Maria Fernanda Espinoza Garcés expressed her solidarity with Sri Lanka during these trying times in her opening statement. She stated that she was moved by Sri Lankans coming together following the attacks, opening the doors of mosques and temples for Christian services, and providing assistance to victims and their families.

“I hope that we can use today›s commemorative event to express our solidarity with Sri Lanka, strengthen our resolve to combat violent extremism, increase multilateral cooperation on security and tackle the financing of terrorism. We must ensure that new and evolving technologies promote and do not harm human security,” she said.

United Nations Deputy Secretary-General Amina Mohammed in her remarks expressed sorrow that places of worship have become the playground of terrorists. “The world is seeing a dangerous rise in intolerance, xenophobia and racism,” she said, highlighting the work of the UN in order to combat terrorism and extremism, including through addressing hate speech and ensuring safety of religious sites. Ambassador Dr. Rohan Perera in his statement noted that, “these inhuman and cruel acts on the holiest of days for Christians were debased in their cruelty and in their locations – carried out when devotees had closed their eyes in prayer and as tourists were enjoying a celebratory breakfast. Yet, against this carnage, as a nation, we became one, and the sorrow that the Christians underwent became the collective sorrow of an entire nation.”

Ambassador Perera also noted that the world is encountering many challenges as a result of the changing face of terrorism and violent extremism, not least of all due to the phenomenon of foreign terrorist fighters, financing of terrorism, rapid advancement of technology, among others. The need for sharing information, technology, databases, and intelligence in combating terrorism is paramount, he said.

He pointed out that it is vital, if “we are to preserve democratic space, that valuable tools such as Facebook and Twitter among others, are utilised as spaces to nurture healthy debate rather than breed violence and extremism. It is time for us to explore the possibility of an international consensus on a regulatory framework,” Dr. Perera said.

“I would be failing in my duty as Chair of the Working Group on Measures to Eliminate International Terrorism if I do not state now, that the time has come for the international community to go beyond words and to demonstrate political will and commitment in taking the last remaining step to conclude the Convention on Terrorism and complete the sectoral multilateral treaty regime to address the global phenomenon of terrorism. Too much blood has spilt for us to remain deadlocked on this issue,” the Ambassador also noted.  The Permanent Representative of India thanked the President of the General Assembly for reaching out thoughtfully and arranging this commemorative event for the victims of the dastardly attacks on Easter Sunday in Sri Lanka. “We appreciate your efforts to bring all of us together on a common platform. In times of pain, a balm helps. As a close friend and neighbour of Sri Lanka with civilisational ties that are millennial, all of India is deeply distressed by the attacks and the cruel violence. We share the deep pain and anguish of the Sri Lankan people in this hour of grief. Going forward, for our part, India is ready and willing to assist Sri Lanka in any manner the Government of Sri Lanka desires us to help,” he said.  Ireland in their speech said “we stand with Sri Lanka not only in words but also in action,” a sentiment echoed by many other nations.  The chairs of the regional groups also delivered statements in solidarity with Sri Lanka and re-emphasised their commitment to tackle terrorism.

An Elegy specially composed in memory of those who died in the Easter Sunday attacks in Sri Lanka by eminent Sri Lankan composer and conductor Dr. Lalanath de Silva, was played during the event. The United Nations Chamber Music Society performed a beautiful rendition of ‘Amazing Grace’ sung by David Yardley of Australia and Mahalya Gogerly-Moragoda from Sri Lanka/USA in honour of the victims.