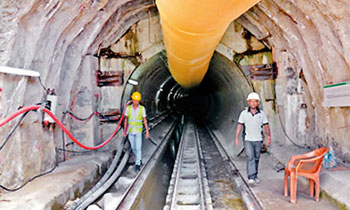 The Mahaweli Development and Environment Ministry today announced a temporarily suspension of drilling operations in the Uma Oya Project for ten days until a solution was found for the water leakage that had taken place.

Ministry Secretary Anura Dissanayake said the project was temporarily suspended and that all the drilling machines would be withdrawn from the lower level of the tunnel within ten days.

The suspension came after President Maithripala Sirisena called those involved in the Uma Oya Project for a meeting to attempt to find a solution to the situation that had arisen in the area surrounding the project.

During the meeting the decision on the temporary closure of the project was taken as an initial step to control the situation. The President had ordered a sum of Rs.300 million to be allocated to the Badulla District Secretary’s office to provide relief to the people of the area after getting an estimate done on the damage caused as a result of the project. He also called for a report from the National Building Research Organisation (NBRO) on the amount of damage caused.

It was also reported drilling machinery utilising modern technology would be flown in from Switzerland before July 18. This was in response to a request made by President Sirisena during his official visit to Switzerland in March. Further excavation work would be done based on the instructions of international experts who were due in the country soon.

During the meeting with the President the following decisions were taken:

2) The three water supply projects implemented by the National Water Supply and Drainage Board to be considered on a priority basis and completed within the next two months and connections provided free of charge.

3) To ensure that there will not be a scarcity of drinking water for the residents of the areas devastated by constructing six deep wells in areas where ground water resources exist by the NWS&DB under the Ministry of Irrigation and Water Resources Management.

4) The Forest Conservation Department to undertake a community based programme in widening the activities of planting local and endemic plants in the relevant areas with the aim of conservation of natural ground water resources. (Chaturanga Pradeep)