You are here: Home / Breaking News / Udayanga had not returned his passport: Ravi – Daily Mirror 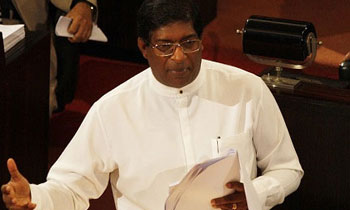 Foreign Minister Ravi Karunanayake said yesterday even though the government had cancelled the Diplomatic Passport of former Sri Lankan Ambassador to Russia Udayanga Weeratunge, he had not returned it to the authorities.

He told parliament that he had visited Japan, Pakistan and Dubai with former President Mahinda Rajapaksa on several occasions recently.

He said this in response to a question raised by JVP MP Dr. Nalinda Jayatissa.

Dr. Jayatissa said former Deputy Foreign Minister Harsha De Silva had earlier told parliament in response to a question raised by him that Mr. Weeratunge”s Diplomatic Passport was cancelled but the Fort Magistrate last week ordered to suspend it.

He asked if the Deputy Minister had given wrong information in parliament saying that it was cancelled.

Minister Karunanayake said a detailed answer to the question would be given shortly. (Ajith Siriwardana and Yohan Perera)