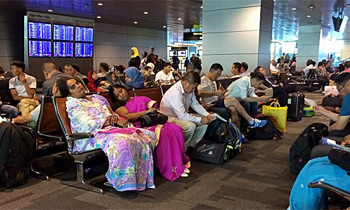 The United Arab Emirates has banned people from publishing expressions of sympathy towards Qatar and will punish offenders with a jail term of up to 15 years, reports said on Wednesday.

The United Arab Emirates, along with several other powerful Arab states, severed diplomatic ties with fellow Gulf state Qatar on Monday over its alleged support for Islamist groups and Iran. Qatar denies the accusations.

President Donald Trump took sides in the deep rift in the Arab world on Tuesday, praising Middle East countries’ actions against Qatar, but later spoke by phone with Saudi King Salman and stressed the need for Gulf unity.

‘Strict and firm action will be taken against anyone who shows sympathy or any form of bias towards Qatar, or against anyone who objects to the position of the United Arab Emirates, whether it be through the means of social media, or any type of written, visual or verbal form,’ Gulf News quoted UAE Attorney-General Hamad Saif al-Shamsi as saying.

Since the diplomatic row erupted, slogans against and in support of Qatar have been among the top topics discussed on Twitter in Arabic, which is a hugely popular medium of expression in the Arab world, particularly in Saudi Arabia.

Newspapers and television channels in the region have also been engaged in a war of words over Qatar’s role.

As the conflict between Qatar and several Middle Eastern countries intensified, Etihad Airways announced on Wednesday that Qatari nationals will not be allowed to board flights to Dubai or Abu Dhabi because the United Arab Emirates has banned them from passing through its airports.

Foreigners living in Qatar with residence visas will no longer be eligible for visas on arrival into the United Arab Emirates, a spokesman for Etihad Airways added.

The United Arab Emirates had already said Qatari nationals would not be allowed to enter the country or cross its points of entry, although the practical effects on airline passengers had been unclear until now.

Qatari nationals will now not be allowed to pass through airports in the UAE even to change planes.
‘This ruling applies to all airlines flying into the UAE, including Etihad Airways,’ the Abu Dhabi-based airline said.

The transit ban on Qataris is stricter than restrictions on Israeli passport holders who are allowed up to 24 hours to change planes at UAE airports, even though Israel and the United Arab Emirates lack diplomatic relations.

Emirates, which has its hub in Dubai, did not respond to a request for comment. Qantas Airways, a codeshare partner of Emirates, said it would not carry Qatari nationals on its flights to Dubai due to the government restrictions.

A Qatari official has said an ultimatum issued by Saudi Arabia and its allies for the emirate’s citizens to leave is a violation of human rights that requires UN intervention.