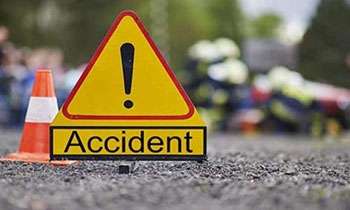 Two individuals succumbed to death after the three-wheeler in which they were traveling toppled on the Hatton- Nuwara Eliya Road and crashed into a private bus coming on the opposite side this evening, police said.

The driver of the three-wheeler who received severe injuries had admitted to the Glankan Hospital and later transferred to Kandy Teaching Hospital.

The driver of the private bus has been taken into custody by Hatton Police while the post mortem over the accident to be conducted tomorrow.

Hatton Police suspects that the excessive speed of the trishaw may cause the accident. (Thilanka Kanakarathna)