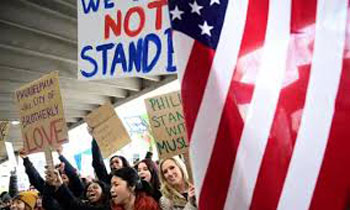 The U.S. Court of Appeals for the 9th Circuit announced early Sunday morning that it has denied the Department of Justice’s emergency motion — filed late Saturday — to issue an immediate stay on a Washington State judge’s temporary restraining order of President Donald Trump’s controversial travel ban.

Lawyers for the Department of Justice argued in the filing that the restraining order is “vastly overboard,” and it “second-guesses” the commander in chief.

“The injunction contravenes the constitutional separation of powers; harms the public by thwarting enforcement of an Executive Order issued by the nation’s elected representative responsible for immigration matters and foreign affairs; and second-guesses the President’s national security judgment about the quantum of risk posed by the admission of certain classes of aliens and the best means of minimizing that risk,” Department of Justice lawyers wrote in the filing.

Six key arguments in the brief are as follows:

–The actions taken through the executive order were authorized by an act of Congress and also were taken pursuant to the president’s exclusive power as commander in chief and over foreign policy.

–Immigration is an issue dedicated to the executive.

–National security issues are the sole province of the president, not the courts.

–The order does not discriminate by religion, just country of origin.

–It excludes foreign states from sending people to the United States for a temporary period.

–All of the countries at issue were deemed sponsors of terror by prior administrations.

The motion cites separate federal court opinion issued Friday in Massachusetts which rejected a request to suspend the executive order.

As ABC News reported earlier Saturday, the Trump administration had filed a formal notice of appeal of the temporary restraining order of the travel ban.

After a federal judge in Seattle issued a nationwide restraining order halting parts of the executive action signed by President Donald Trump that temporarily bars some immigrants and refugees from seven predominantly Muslim countries, the White House promised to appeal the ruling “at the earliest possible time.”