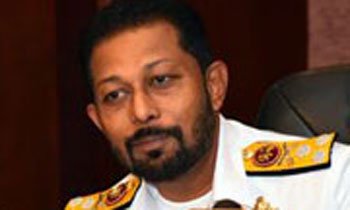 The outgoing Navy Commander Vice Admiral Travis Sinniah has been promoted to the rank of Admiral.

He was appointed as the 21 st Commander of the Navy on August 18 and his term was extended by one month by the President when he turned 55 on September 26.

Admiral Sinniah has rendered a noble service to the Navy during his 35 years of unblemished naval career.

Navy said Admiral Sinniah joined the Sri Lanka Navy in 1982 as an Officer Cadet of the 11th intake and rendered an exceptional service to the country.(Darshana Sanjeewa)