You are here: Home / Breaking News / Tomorrow: new beginning or beginning of an end – Daily Mirror

The No-Confidence Motion against the Prime Minister is not just against him. In its practical implication it is about the government as a whole. This is not about how it is interpreted constitutionally, but how it would work out, practically, if it wins.

It states, “This Parliament resolves that it has no confidence in Ranil Wickremesinghe’s ability to function as Prime Minister and as a Minister of the Cabinet, and as well as the Government in which he holds the office of Prime Minister, any longer.”

In purely constitutional terms, the government could well go on under a different prime minister even if Mr Wickremesinghe is ousted by the No Confidence motion. But, how practical is that? If this one wins, this is the beginning of a very rapid end. The UNP and the government will be effectively headless and anyone who succeeds Mr Wickremesinghe as the prime minister would be at the mercy of a jubilant joint opposition and is more likely to be a stop- gap prime minister until either the next general election or the JO appoints one of its own. 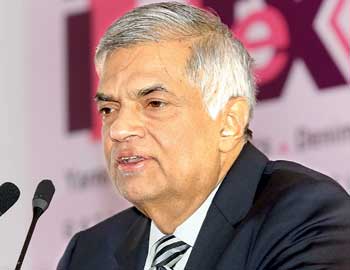 However, most likely, the Joint Opposition will lose the number game. As ex-president Mahinda Rajapaksa has implored, “we have delivered the signatures of all MPs on our side. It is up to President Sirisena now to carry through the rest. We await this.”

Basically, the joint opposition is expecting the president to do the dirty work. In fact, the President seems to be swinging his proverbial sword at the prime minister all too often. He has progressively weakened the Prime Minister’s hold on the government. He has abolished the Cabinet Committee on Economic Management (CCEM) headed by the Prime Minister, and last week removed Central Bank and the Securities Exchange of Sri Lanka that were previously under the purview of National Policies and Economic Affairs Ministry held by the prime minister, and placed them under the minister of finance, Mangala Samaraweera. Subsequently, several other institutions that were formerly under the prime minister were also removed and re-assigned to relevant line ministries.

The UNP will have to part ways, possibly carrying with it whoever SLFP MPs willing to join it, and form a new government

The President’s intentions are not all that clear. Is he believing that the prime minister would orchestrate a cover up of the bond scam? Or does he simply think it is unethical for the prime minister to oversee these institutions in the light of revelations made before the Bond Commission and absconding former governor Arjun Mahendran?

However, the president’s silence over the no-confidence motion and what appears to be his tacit approval of it, suggest something different. The president may be plotting to strengthen his hold in the SLFP by weakening the prime minister’s position in the government. His recent political decisions are reflective of the desires of the SLFP’s Mahinda-loving factions, and by extension, those of the joint opposition. Effectively, the president is playing an indirect role in destabilizing his own government.

At the end, the president will have to announce his position as to whether he supports the no-confidence motion or not. In the case of former, battle lines would be drawn and that would be the end of the Yahapalanaya government. If he opposes the motion, then, the president and the UNP will have to work out a plan to salvage the Yahapalanaya from the current inertia. There again the president is following a third strategy; he is standing on the fence, perhaps with the intention of backing the winning horse. His vacillation creates further political confusion.

Even if the entire SLFP and the joint opposition unite (that is 95 seats in Parliament), they still fall 18 votes short of a Parliament majority. The UNP (105 plus the Speaker) can manage to survive the vote with the help of the TNA, some of whose members are likely to vote against the no-confidence vote while some others may abstain. To guarantee that outcome, the UNP should be able to secure the loyalty of all of its MPs. If things come to a close combat, the Joint Opposition and its financers would try the old tricks that were used to buy votes for the 18th Amendment to the Constitution. Bag loads of cash will change hands. If the Bribery Commission is really committed to fight high profile corruption, here is one case that they ought to keep an eye on.

In purely constitutional terms, the government could well go on under a different prime minister even if Mr Wickremesinghe is ousted by the No Confidence motion. But, how practical is that? If this one wins, this is the beginning of a very rapid end

The real question then would be the future of the unity government. If the SLFP votes for the no-confidence motion, the continuation of the unity arrangement would no longer be tenable. Trying to do so would make the government a farce. The UNP will have to part ways, possibly carrying with it whoever SLFP MPs willing to join it, and form a new government. Securing a simple majority in Parliament will however be a tall order, however not that difficult for an industrious political leadership. The first Rajapaksa government, which he inherited from former president Chandrika Kumaratunga, had only 105 seats and went to win the war.

A UNP-led government would be relieved from the current internal wrangling between the two main partners. It would also allow a degree of a unified political direction. However, the problem with Mr Wickremesinghe is he lacks political initiative, and apparently that lethargy is now taking a heavy toll on the country’s economy. Successful leaders in developing countries of the caliber of Mahathir Mohammed, Lee Kuan Yew in his days, and Narendra Modi have shown greater deal of political and economic pro-activeness and have run rings around their opponents when they have to. Developing countries have different priorities and a sense of urgency for growth, which can be achieved only if they secure a degree of political cohesiveness which these states are lacking. Sometimes, to achieve these ends, one has to follow unorthodox means, reflective of social and economic conditions of these countries.

Basically, the joint opposition is expecting the president to do the dirty work

A UNP government can appoint Sarath Fonseka to catch crooks and increase the heat on the joint opposition. It should act to fast track the implementation of development projects that have been stuck for too long, expedite land acquisition for FDI projects and think new ways of riot control. For most of these things, Mr Wickremesinghe can ask ex-President Rajapaksa how he managed to deliver . With all his other mistakes, he did quite well on economy, though he wasted money on a few vanity projects.

All in all, this government cannot continue this way, April 4th should be the day for a fresh start.