You are here: Home / Breaking News / There’s no alternative to the national Govt: PM – Daily Mirror 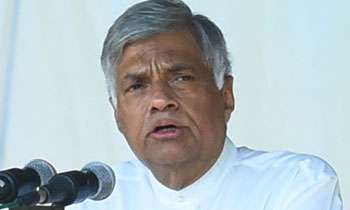 Prime Minister Ranil Wickermesinghe said today at the ceremony to mark the 25th death anniversary of former President Ranasinghe Premadasa held at Hulftsdorp that there was no alternative to the national government.

He said there were many who criticised it but none of them were able to come up with an alternative form of governance.

“We will implement a speedy development programme in the wake of today’s Cabinet reshuffle taking into consideration the message given to us by the people at the local government elections,” the Prime Minister said. “We are facing the same challenges as we did during the tenure of President Premadasa. Developing industries and generating employment is time consuming. President Premadasa wanted me to take over the Ministry of Industries. He had a discussion with me on these matters. We provided tax incentives to industrialists. Later he wanted more employment opportunities in rural areas. He came up with the 100 garment factory concept. I asked him how it could be implemented because rural areas do not have infrastructure facilities. But he went ahead with his concept and implemented it within one month. Later he extended it but was unable to complete it because of his assassination.”

Opposition Leader R. Sampanthan said former President Premadasa was deeply committed to bringing about peace and harmony among peoples of all communities.

“He wanted all Sri Lankans to live in an undivided, indivisible nation. President Premadasa felt that the 13th Amendment is not the final solution to the national question. This why the Mangala Moonasinghe committee was appointed,” he said.