Sri Lanka would go to a presidential election sometime during the next year as the presidency enters the final year of its five year term in January 2019. The prospect of a new Constitution, which may also require the approval in a referendum is diminishing. And even the constituent partners of the government are divided over the rationale of abolishing the executive presidency. A presidential election plus a general election should the president decide to dissolve Parliament after four and a half years into its term – is the most likely outcome. And it would also be a three way race, that pits Prime Minister Ranil Wickremesinghe, President Maithripala Sirisena, who has now gone back on his earlier commitment to not to seek a second term, and the Joint Opposition candidate, most likely Gotabaya Rajapaksa. The candidacy of Wickremesinghe and Sirisena would see anti-Rajapaksa voters divided and as the recent local government elections vindicated, the winner of this rivalry would be the Joint Opposition. 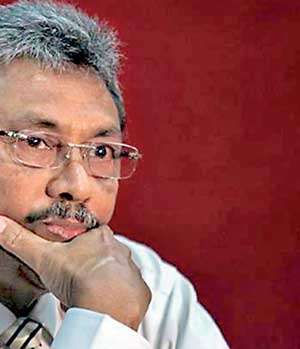 Gotabaya plays his presidential ambitions close to his chest, yet, despite the quirky calls for Chamal Rajapaksa or Dinesh Gunawardene as a potential presidential candidate, even those who make such claims know in deep down their hearts, that those gentlemen are yesterday’s garbage, who neither inspire voters , nor have political courage for decisive policy.

In contrast, Gota is an autocrat first, and if ever, is a populist by pretense . For those like Gota, electoral legitimacy matters only until they achieve political power

In contrast, to give the devil his due, Gota is different. Being a Rajapaksa adds up to his electoral appeal. But, a good part of his image is built on not being a politician, though younger Rajapaksa was more powerful, and lethally so, than any politician during the presidency of his brother.

Gota speaks as if he has rendered himself unto his elder brother. “If former President Mahinda Rajapaksa asks me to contest and to carry forward the ex-president’s mission, I would”, he asserts. However, even MR knows Gota, who is unpredictable and a law unto himself is a dangerous choice. When he was the president, he used to tell the media, “don’t criticize Gota, criticize me.” Those who count on Gota to be the reincarnation of MR may be committing a costly miscalculation. Gota is not MR.

Consider the contrast of their personalities

Local and foreign political pundits tend to describe MR as authoritarian. Yes , he was, however, the operative word of Rajapaksa’s political character is that above all, he was and is a populist. Absolutism of his rule was subjective and was a predictable outcome of his populist legitimacy. In other words, MR was a populist first, and authoritarian later.

In contrast, Gota is an autocrat first, and if ever, is a populist by pretense . For those like Gota, electoral legitimacy matters only until they achieve political power. Once there, rather than playing by the rules, they are more likely to rewrite them and to rely on the arbitrary force of the state’s coercive organs. The Rajapaksa administration’s resort to white-vans and extra-judicial killings of prison inmates to address the law and order problem, at the expense of the very rule of law it was entrusted with to defend, was primarily a product of Gota’s personal preference.

Those who terrorized the public with bed time stories of Idi Amin, during Sarath Fonseka’s presidential campaign now has a real prospect to worry about.

MR was a populist to the extent that he was so cocksure that he would win the popular vote, that he disregarded opposition from his advisors to call snap elections one and half years before the end of his presidential term. When he lost, he left power gracefully, perhaps because, he knew he would make a comeback. Gota may not. Electoral mandate would not matter much in a Gota presidency. There will be other layers of state power through which he derives legitimacy and obedience. If MR was a Hugo Chavez,Gota is more likely to become an Abdel Fattah el-Sisi,Egypt’s Army chief-turned President, who exploited popular grievance to capture power and then made an ass out of the country’s nascent democracy.

MR was a populist to the extent that he was so sure that he would win the popular vote, that he disregarded opposition from his advisors to call snap elections 18 months before the end of his presidential term 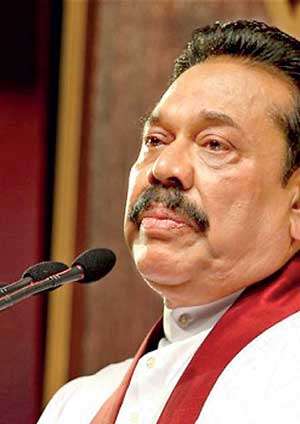 Nonetheless, MR’s populism had its constraints. The economic windfall at the end of the war provided him with time, space, and sufficient legitimacy to address the structural problems of the economy. MR squandered that opportunity because he valued his political calculations over the long term viability of the economy. When the post- war bonanza fizzled away, economic troubles, hitherto suppressed and unattended, magnified. His government spent US $ 2.5 billion to defend the value of an over-priced rupee. By the last year of his government (2014), exports as a share of the GDP halved from their 2000 value (33%). The Electricity board and Petroleum Cooperation accumulated looming losses due to unaffordable subsidies. National carrier was ran to the ground. He left a right royal mess for his successor to clean up.

Perhaps, Gota might have been more proactive. As much as he was willing to send Police STF to evict slum dwellers, he was also not inclined to feed the people with subsidized sprats and lentils. Some of the much talked about feats of the Rajapaksa administration such as Colombo beautification was made possible due to Gota’s cold-hearted determination.

Nonetheless, MR’s populism had its constraints. The economic windfall at the end of the war provided him with time, space, and sufficient legitimacy to address the structural problems of the economy

However, there is a glitch. Even the dictators need a group of competent advisors to run the economic policy. Pinochet had ‘Chicago boys’, young economists trained in the University of Chicago; pro-American autocrats in East Asia had their American advisors. Who has Gota got? Majority of the so- called intelligentsia in  ‘Viyath Maga’ are no name nobodies, who are more at ease in parroting long lost economic theories of a middle path, which has proved to be a road to nowhere. They imbibe a nostalgia for the 1956, a populist misadventure that deprived the country of its hitherto held competitive advantage, leading us to the depravity of sending our women to toil in the Middle East. There is also a sense of strong opposition from his backers towards free trade agreements. Though such opposition is shrouded in the concerns for saving local jobs, the untold desire is to maintain the rotten status quo that favours a few under-performing industries at the expense of the future of a nation.

At the end, running a country is far more complicated than evicting squatters in Kompannavediya. If the panacea for the efficient governance is enlarging the role of military in public life, Pakistan could now have been an economic miracle. Gota’s hype does not provide solutions to complex problems that Sri Lanka is currently faced with. Still, more than anything else, the current government’s failure to provide a strong leadership continues to provide currency to that farce.