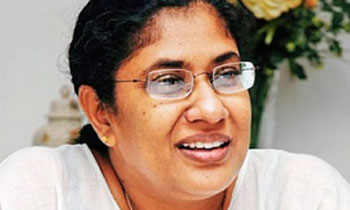 Minister of Housing and Construction Sajith Premadasa sets a good precedent to other ministers by not using the official vehicle given to him by the government and rejecting his ministerial salary, Minister of Foreign Employment Thalatha Athukorale today said.

Attending a ceremony at Balangoda to lay the foundation stone to initiate the project ‘Udaa Gammana’ she said that the minister is a role model who doesn’t owe anything to the country.

“I’m a minister, I travel using a government vehicle and we receive a salary from the government. If there is any minister who doesn’t benefited by these, it is only him, I’m honoured to say that. The Minister is a reflection of his father former President Ranasinghe Premadasa” she said.

She reminded that a former Housing and Construction Minister Wimal Weerawansa is now in prison for alleged misuse of government vehicles.

“MP Wimal who preached left and socialist politics had become a millionaire today. His hair gel was imported from the USA. I have never seen such a large office table which was used by him during his tenure in the ministry, much larger than a king size bed,” she said. (Thilanka Kanakarathna)