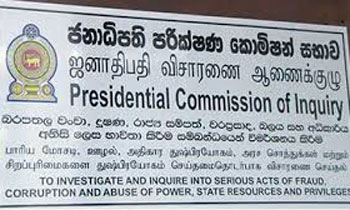 For the third time, President Maithripala Sirisena has decided to extend the term of the Presidential Commission of Inquiry (PCoI) appointed to investigate the Treasury bond issue by six weeks, sources close to the Attorney General Department said yesterday.

The decision is reported to have taken on the requests made by the AG’s Department that more time was needed to complete the investigations into the case before a final report could be handed over to the President in this regard.

Accordingly, the PCoI which was to end its term on October 27, will be extended till December 8.

The PCoI was to end the term firstly on April 27, but its term was extended till July 27.

However, in July the President issued a Gazette extending the term of the PCoI for another three months which ends on October 27. (Shehan Chamika Silva)