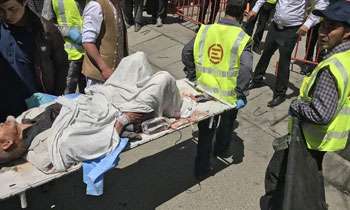 A suicide bomber struck a voter registration center in the Afghan capital on Sunday, killing at least 31 people, officials said.

The large explosion echoed across the city, shattering windows miles away from the attack site and damaging several nearby vehicles. Police blocked all roads to the blast site, with only ambulances allowed in. Local TV stations broadcast live footage of hundreds of distraught people gathered at nearby hospitals seeking word about loved ones.

The Taliban, who usually claim their attacks, denied involvement. That means the bombing was likely carried out by a local Islamic State affiliate, which has been behind past bombings in Kabul that targeted civilians. Both groups are opposed to democratic elections.

Elsewhere in Afghanistan, a district police chief in the northern Balkh province died of his wounds after being shot Saturday during a gunbattle with insurgents, according to Sher Jan Durrani, spokesman for the provincial police chief in Balkh. He said around a dozen insurgents were also killed in the battle, which is still underway.

Durrani identified the slain commander as Halim Khanjar, police chief for the Char Bolak district. The Taliban claimed responsibility for the killing. (The Indian Express)