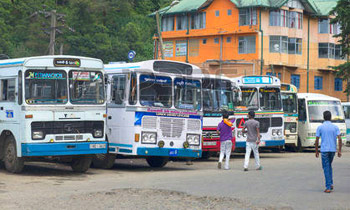 Strict rules will be implemented to ensure that bus drivers and conductors provide a quality transport service to the commuters, National Transport Commission (NTC) said today.

He said the facilities provided by the semi-luxury buses were not in satisfactory when compared with the bus fares and most of them were overcrowded.

“It is similar on highway routes. We have authorised the highway traffic police to enforce the law against the bus owners,” Mr. Hemachandra said.

He said the NTC Mobile Inspection Unit is vigilant on overcrowding in luxury buses and suspend route permits of such buses.

When questioned on the bus mafia and the recent violence by bus drivers and conductors, Mr. Hemachandra said few incidents were reported and bus owners summoned and warned.

However were solved after they were summoned to the NTC with the bus owners and advised. (Thilanka Kanakarathna)