The First Session of the Sri Lanka-Finland Bilateral Consultations at senior officials’ level was successfully concluded on 1 October at the Ministry of Foreign Affairs in Colombo. 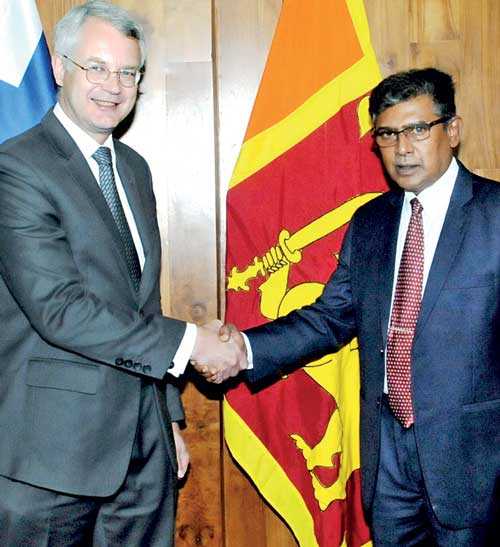 The deliberations broadly focused on bilateral trade and investment and followed up on the progress being made in existing areas of cooperation, including vocational training, health, renewable energy, ICT and digitalisation, which had been identified by both countries during the visit of Prime Minister Ranil Wickremesinghe to Finland in October 2017.

The modalities and substantive matters with regard to the implementation of the MOUs in the areas of vocational education and training, health and digitalisation, signed between the two countries in June 2018 during the visit to Sri Lanka of Under-Secretary of State of the Ministry of Economic Affairs and Employment of Finland Petri Peltonen, were also discussed at this meeting.

The Finnish delegation acknowledged the steps being taken by the Government of Sri Lanka to strengthen democratic institutions, advance reconciliation, and achieve economic development. Sri Lanka’s active and progressive engagement with the international community was also noted with appreciation. Both countries reaffirmed their shared commitment in working towards intensifying engagement at multilateral fora on issues of mutual interest.

The Second Session of the Sri Lanka-Finland Bilateral Consultations will be held in Helsinki, Finland in 2020.